Could it be me.....I managed to surpass even Lady Gaga yesterday by changing colour from green to purple ...sadly my chameleon state was somewhat more mundanely achieved  by firstly wire brushing a green shed and then later on going blackberrying. That does not mean I have abandoned the cause though!!

No this particular individual went by the name of  John Oliver and I encountered his tale upon a visit to Highdown Hill near Angmering. I can heartily recommend a trip to this spot if you are in the area because there is a lovely free garden to visit next door and the partial remains of an Iron age Hill fort on the summit for added interest.

This particular gentleman is buried on top of the hill 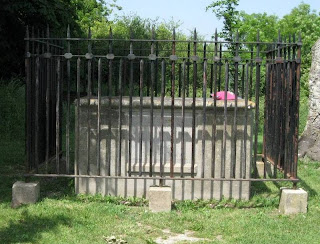 A slightly unconventional burial place but not that noteworthy you might rightly think except that the tomb was built 27 years prior to his actual death in 1793 and he used to visit it daily. He also kept his coffin under his bed on casters. Some would claim that he was merely a slightly off the wall character, but others more cynically believed him to be the head of a smuggling gang and that he used his empty tomb to store contraband. A wealthy miller by trade rumours abounded that he would set the sails of his windmill [now demolished] at different angles to indicate to his cronies out at sea that the customs men were absent.
Even his funeral was done in great style for his coffin was borne by young girls in white- a custom usually reserved only for the burial of young children.

Legend has it that he insisted on being interred upside down so that on the Judgement Day when the world turned topsy turvey he would be the only one facing the right way. Furthermore, beware, for if you run around the Miller's Tomb as it is known seven times his ghost will jump out and chase you!