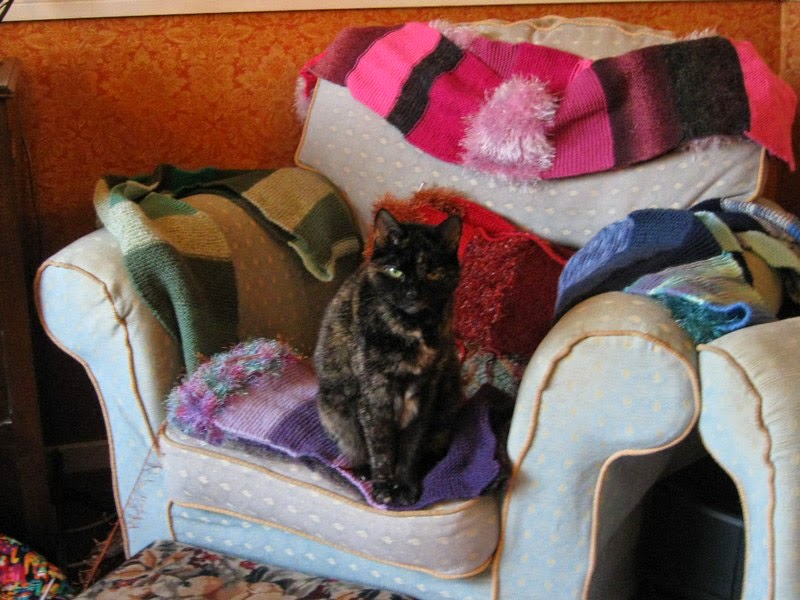 Anyone who is owned by a cat will know that they are prone to moments of sheer madness when they canter around the house like a furry thing possessed. It is almost as if some invisible entity is hot on their tail. Here at GBT it is affectionately known as "getting the stupids".

Once such episode occurred a few days ago- quite a common place event which usually involves Psychocat hurtling up the stairs hollering at the top of her voice before screeching into our room at high speed, taking a tricky left hand turn and out again to reappear in a similar vein elsewhere moments later. Normally after a few moments of putting on such a ridiculous display she is to be found collapsed on the sofa haughtily denying all knowledge of said previous behaviour. Only this time things didn't quite go according to plan...yes she launched herself into our room as per normal but did not factor in that the door was shut....we only found this out when we heard a fairly hefty thud against it. She was unhurt but we committed the cardinal sin...we LAUGHED.....she left the house for three days in a towering huff. I should explain that by three days I mean just daylight hours...she was too soft to keep up her protest at night time and by leaving home...well she slept on the doormat in the porch in the sunshine instead. She rather sniffily informed me today that her bruises are only just healing....I beg to differ...the only bruising she suffered was to her ego!