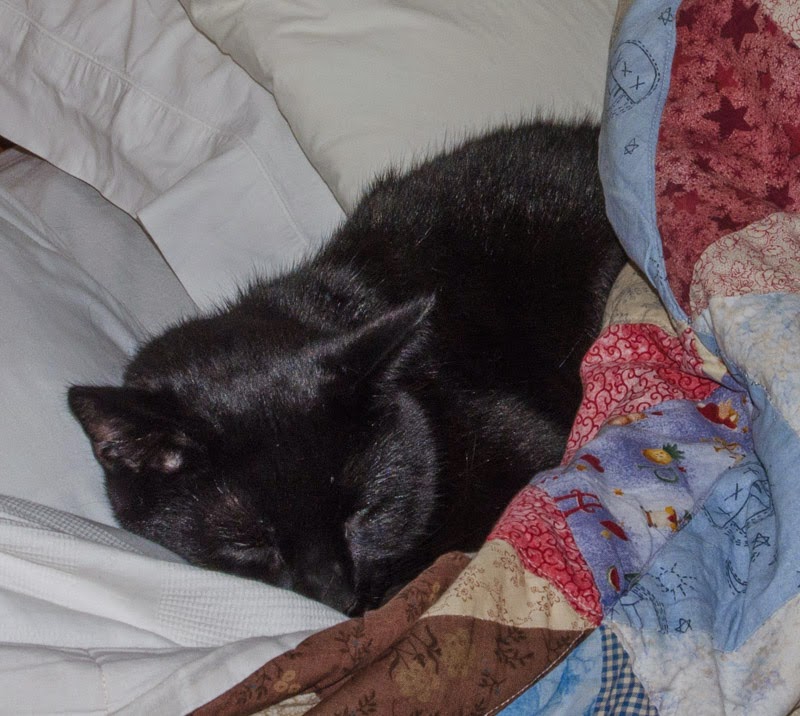 Well dear old Humphrey has now been with us four months and he's getting on rather well. As you can see he's taking full advantage of every situation. Naturally he's not allowed to sleep on the bed so of course he is regularly snoozing on the bed. He's becoming even more affectionate towards us and has even won Mr GBT over. I never thought I'd say that but wonders never cease. He remains very wary of new people and actually backs away which is quite a feat considering his not inconsiderable size.....ah yes well that brings me to the small matter of his appetite which is anything but small.

As a neutered male who was abandoned and starved you can imagine that he's very food orientated. He still scarfs down his meals with indecent haste but at least he isn't asking all the time now. He is relaxed enough to sleep these days. The upshot of all this eating meant he had got rather tubby so he was put on a light cat food for neutered males aged up to seven as recommended by our local vet. It's not one that's available from the pet shop or supermarket so initially I bought some from our local practice when they had a special offer. The largest size available is 10kg which costs £60 from them. We are entitled to a 10% discount as we are members of the Healthy Pet Club. However, I remembered that we used to buy the flea treatments from a site called Animed when we had Psychocat so I just checked just out of nosiness. £43.90 and free p&p with an additional 10% offer at the time I ordered. We've always found them to give good service and I mentioned them to a chum earlier in the week when she was stocking up on meds for her dog. The cheapest she'd found for the tablets was £70- Animed were £58. Maybe worth at least a quick look at you buy a lot of pet supplies online. I'm not affiliated with the site simply a satisfied customer wanting to help others to save their wonga.