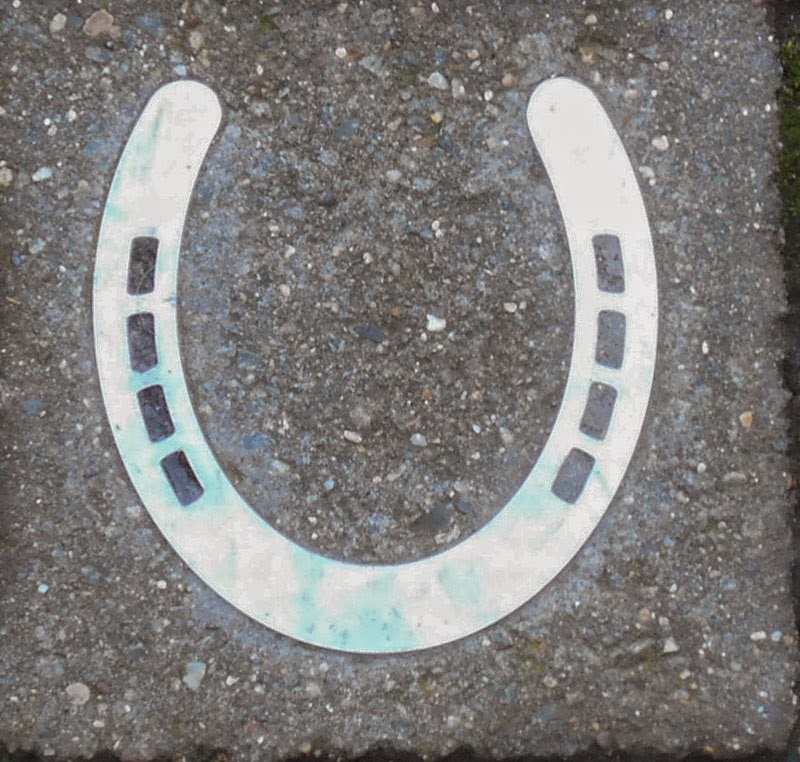 Many of us have horseshoes around our homes or out buildings in the knowledge that they symbolise good luck. Different people have told me that they should be hung with the points facing upwards to keep the luck in whilst others have insisted that they should be the other way so that the good luck can fall on you. Recently I even read that only blacksmiths can ever hang them upside down.

The horseshoe features in the Sussex folklore tale of St Dunstan and the devil. The story goes that the devil disguised himself as a beautiful woman in order to visit the saint when he was working as a blacksmith. However, his undoing proved to be the cloven hoof St Dunstan glimpsed beneath his silk gown and once rumbled he grabbed the Devil's snout with a pair of red hot pincers:
"Saint Dunstan so the story goes,
Caught old Satan by the nose,
He tugged so hard and made him roar,
That he was heard three miles or more."

It will comes as no great surprise that ever superstitious sailors used to nail a horseshoe to the mast in the belief that it would help them avoid storms.

Nailing an iron horseshoe to the door should repel evil spirits- even better on the back of the door so they could not be seen by the witch trying to enter. Iron was imbued with magical powers because it could withstand fire. To find a horseshoe was considered good luck and if it still had nails in it all the better. You could increase the luck by spitting on it apparently! If you wrapped it in fabric, specifically red flannel for some and hung it above your bed then it would prevent nightmares.

Nowadays we continue to associate the horseshoe as a generalised symbol of good luck as they feature frequently on cards expressing this wish for various events and more specifically at weddings.
Up until 2013 there was a three metre high pile of horseshoes in the village of Hodnet Shropshire. Sadly it has now been cleared away
http://www.hodnet.org.uk/main/?page_id=10512
I should have liked to have a nosey at that had I been passing ever but alas that's not to be.