Whoops, whoops and thrice times whoops. Up until last week I had a very snazzy wool scarf my Mummy had knitted for me and then I decided to wash it on a 30C cycle and inadvertently felted it [bet if I had tried to felt it I would not have had such an outstanding success..roll eyes!] This will be the first time Mummy has read this particular piece of news! After initially thinking "Sod it!" I then put my thinking cap on. 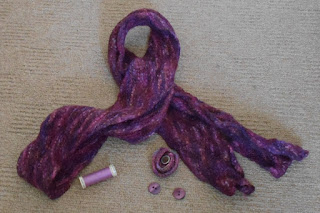 Having rootled around I found a knitted corsage my sister made me that I wear along with some toning buttons off a cardi that has long since worn out and been sent off to be recycled. I've put a few stitches in the scarf to secure it and now sewn on the bits I've found. Simple but I'm pleased with it and still have a wearable item albeit not quite in its original form and at no cost. I believe upcycling is the buzz word- I prefer to call it averting disaster! 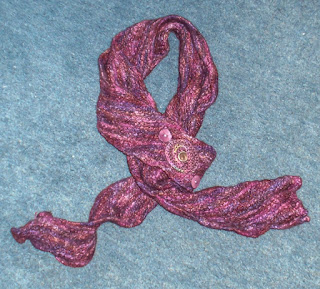