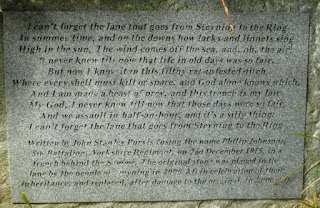 This poem was written under the pen name of Philip Johnson and is to be seen on a commemorative tablet tucked way up along Mouse Lane in Steyning. The Ring to which it refers is Chanctonbury Ring which is on the summit of the hill rising behind. The man behind the words was John Stanley Purvis. He lost his brother George in the trenches but he himself was one of the "lucky ones" [I'm not sure that those who came back would necessarily agree that they were lucky to survive the horrors of war]. In later years he became the Canon of York Minster until his death in 1968.
There is further information here http://steyningmuseum.org.uk/purvis.htm