There's a lot of art work in Dulwich I gather. Arty L and I only had a short while there, so we concentrated on the pictures within the gallery. It's always good to go with a friend who knows what she's talking about, as she added an extra layer to the experience for me. I'm quick to dismiss anything I don't like, but old Arty L is good on her details and she was able to point things out which I might have missed. One example which springs to mind was one by Van Dyck. It pretty much looked like any other stylised painting from the Tudor/Stuart period.....I couldn't really get a handle on what the Duke of Savoy's son would have looked like in the flesh, significant items painted in whose meaning is lost on me [there are notes next to it explaining these I should add]....pleasant enough, but not remarkable. A second look though revealed the stunningly detailed armour he's wearing. Sadly the sitter, Emmanuel Philibert, died of the plague a few weeks later, but the armour still survives. 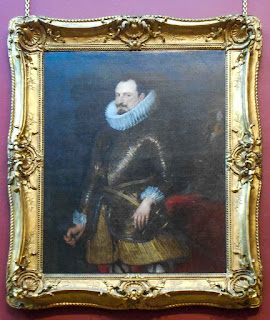 It was definitely a day of small discoveries. I really find faces who don't look back at you decidedly shifty....I'm sure I dismissed a few more paintings on that basis alone. This one had to be my favourite though. 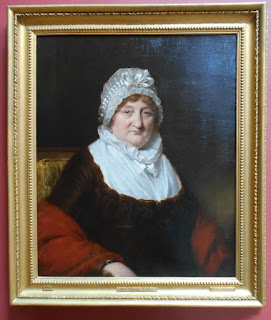 The grand dame looks like she'd be right at home in the pages of a Jane Austen novel. In real life she was Mrs Thomas Linley....she outlived her husband by 25 years and all bar two of her twelve children. You get a sense of a real human face staring at you. By this time [1820] she was in her late 80s and the artist [James Lonsdale] has used a bit of artistic licence to lose a few years and the brown curls definitely weren't the real deal. Well I would wouldn't you if you wanted somebody to buy your art...flattery is king. Nowadays we call it Photoshop😈 From the description she was a very strong character [think you'd need to be with what life had thrown at her], fiercely devoted to her loved ones and a huge embarrassment to her upwardly mobile offspring for her vulgar, penny pinching ways. Sounds quite a gal doesn't she!

Alluding to the art elsewhere in the area I understand that there's a lot of high quality street art to be viewed following Dulwich's participation in a project a couple of years ago. As we were working to a deadline there was no time to explore [a return visit is on the cards methinks], but we did find this behind the station. It's by local artist Burnz and the two murals are called "Wild Wall" and "Hero's Wall". They are to be found on the back/side of the small second hand book shop next to West Dulwich Station. This is part of a local community project called New Leaf which helps young offenders gain valuable skills working in the garden which abuts the building. 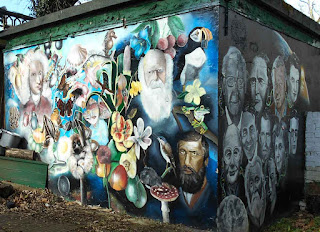 Speaking of all things painting, I too shall be wielding a brush over the next few days....sadly it's of the decorating variety. If you see me on here shout at me because it means I'm skiving and not pulling my weight. Besides any post content would be about as thrilling as this youtube clip...yes ten hours of literally watching paint dry!