Last September I acquired my very own fire pit. It had always been on the wanty, wanty list, but the ones I love start at a grand, so a pipedream it stayed. From this blog post https://gnatbottomedtowers.blogspot.co.uk/2016/09/day-to-day-doings.html?view=magazine I eventually found a way to acquire my very own one legitimately via a cash free route. She's quite a big beast, so lives out in the garden, but is kept under cover.

Every once in a while I've pondered when best to have a fire. Eventually I set a date with my closest friends and left it that it would be cancelled if the weather didn't play ball. Despite what the forecast promised me it was drizzly in that slightly annoying way which doesn't make you really soaked, but just rather damp. We decided to decamp indoors for food, but see if we could get a small fire going anyway for I had a small surprise in store.

Amazingly [actually I shouldn't be amazed this type of thing often happens when I pay attention] the weather cleared and dried up when they got here and for 20 minutes it stayed that way....we were able to quietly read some blessings around it [we're very discreet!] and enjoy the novelty of green and blue flames... 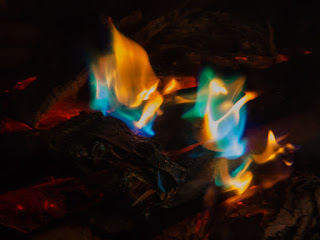 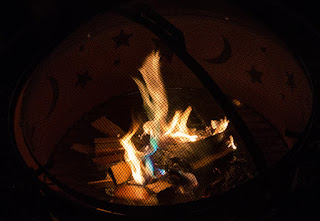 Mr GBT may not be romantic in the conventional sense of the word, but I arrived home one day to find three small packets sitting on the side. Knowing my love of colour and novelty, secretly he bought some Magical Flames for me. As you can see they worked fabulously- the photos really don't do them justice.

After 20 mins the colours finished, the rain returned and the spell was broken. A magical evening.