I decided at the start of this year to attend as many of the monthly Sussex Wildlife Walks as possible in 2017. Not only are they free, you don't need to prebook and it's giving me a chance to explore all manner of nooks and crannies in my beloved Sussex. Due to dancing/holiday/working commitments this will be the last one until August now, but heck I've already beaten last year's dismal record of two😆

Starting from the local village pub in Ashurst the first stopping point was the church of St James. 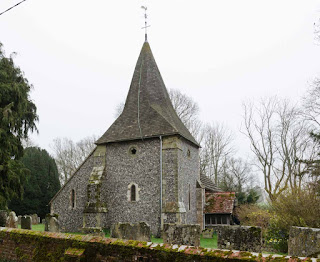 It's attractive enough, but not remarkable.....then I do set the bar high with expectations of mad carved beasts etc etc. However, it did deliver a couple of goodies which made me take note.

This rather strange object is called a vamping horn. Invented by the scientist Samuel Morland [1625-95] it was the forerunner of the megaphone. It's not clear whether it was intended to be used as a musical instrument of sorts or for calling all those slack villagers to the service who fancied a lie in on a Sunday morning! Whatever its purpose only a handful survive now and this is both the youngest and the only cone shaped one [the others have ends like trumpets] 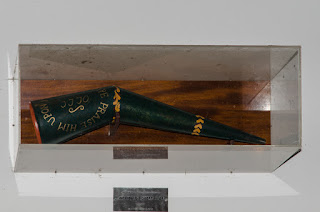 I do so like the way the moss has picked out the pattern on the carved labyrinth on this gravestone. Nearby were a couple more with Celtic details or so my eyes told me.... 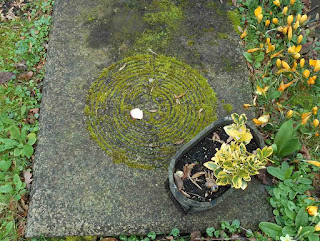 It wasn't until we got home and cleaned the photo up that I found my eyes had deceived me...definitely not a Celtic design after all. Instead a closer look reveals it to be a ball of wool and knitting needles. Warming personal touch and certainly a first. 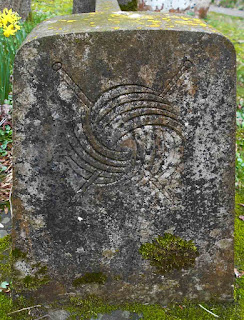 The route was a pretty one over stiles crossing fields and possibly the muckiest, smelliest farmyard I have encountered in many a year. Quietly I noted the primroses and lesser celandine beginning to appear in the verges and the buds waiting to burst forth on the trees. It feels like everything is just holding its breath for a few days more. Perhaps a few of those lovely warmer days will bring it all on before the end of the month. 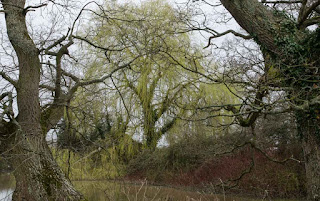 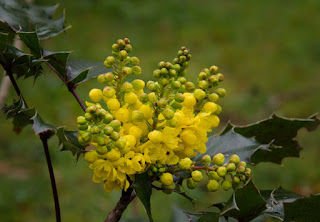 So we had Sussex and we had the walk bit covered, but the wildlife bit was conspicuous by its absence. I could hear the birds competing for attention in the trees, but apart from a buzzard and a couple of mallards everybody else was keeping a low profile. I think this may well have been down to the cloud cover, so folks I'm afraid this owl weather vane is about as close as I got. Even then I didn't have a clue what was on it until I got home as the old vision is now not good enough without my spectacles to see anything clearly [one of the joys of becoming an older dotty dame]. I just pressed and pointed and hoped for the best. Thankfully Lady Luck was on my side this time! 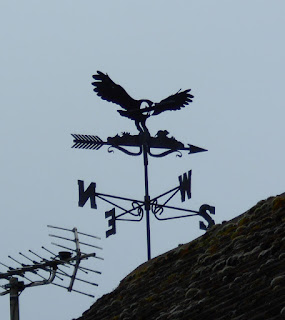 Always enjoy the opportunity to get out of the town on these ambles.