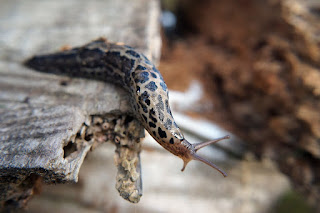 [image from Pixabay]
Now I'm all for cheering on the underdog, but slugs? Really? Frankly I struggle with the little varmits, so I have no idea what possessed me to buy two miniature ones at the dollshouse show where I was working at the weekend but buy 'em I did. Even the lady on the stand looked at me quizzically and asked me "Are you sure?" As ever though I'm always attracted by the non standard in any field. Twenty years of buying miniatures has seen me already make the sensible purchases, so this was no more bonkers than the shrunken head I got last time.

I have to admit that I do think the antennae on a slug is quite attractive, but beyond that ewww. Am I being unduly unfair though to this particular gastropod I wonder? Even I can see that there's more than one species partying [or mainly having one huge slimy orgy by the looks of things] in my compost bin. One, dare I say, has almost attractive markings and looks likely to be the Green Cellar one. Apparently we have 30 types in the UK. Thankfully not all of them living in our gardens either, despite what it might feel like at times.

Are they any good at doing anything apart from munching through our precious plants willy-nilly? They're not totally useless it would seem. According to one site they're important as part of the team of critters which break down your compost [I'm not sure about this as it actually seems to increase their numbers even more] and the theory goes that they are less likely to take an amble round your borders if they've got the opportunity to stuff themselves to the gunwales in the comfort and warmth of your bin. They are also a food source for hedgehogs, toads and birds.....the reason you see thrushes wiping their beaks though is because the mucus tastes so vile. Unlike snails they are not fit for human consumption though

Ah yes and then there's their usefulness in medicine. If you currently have a whitlow you could always place a large black slug on a piece of clean rag and pierce it all over with a needle. Wrap your finger in this rag. What you don't fancy this particular cure? Can't understand why not!!

So with this extra knowledge am I any fonder of the slug. Well no, not really, I'm afraid they remain down there along with the komodo dragon and blind mole rat on my list of least favourite beasts!