Following in the footsteps of the famous.

This is the Fountain, Ashurst, West Sussex and the starting point for our walk on Saturday [more details of that later in the week]. I'd never been there, but like many millions of others I've seen it...chances are you have been a virtual visitor like me too.

Back in 1979 it was white washed and was the location for the video for "Wonderful Christmas Time" by Wings and must have featured on every festive episode of TOTP2 since then.

However, the band aren't the only famous names to grace its presence. Sir Laurence Olivier had his own designated snug....presumably the picture was so that he could recognise himself and where he liked to be seated in case he had over indulged in a tipple or three😏 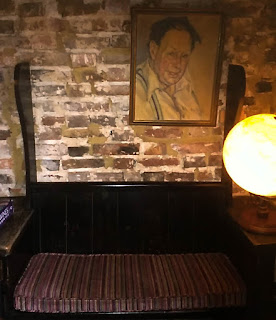 Anyway if we're talking all things "Larry" this gives me the perfect excuse to put up the clip of Peter Sellers performing "Hard Day's Night" in the style of Olivier's interpretation of Richard III. Thus I started the post with a connection to the Beatles with Paul McCartney and I finish it with some of their lyrics.