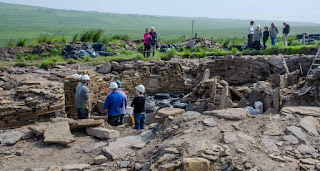 On the back of watching Time Team for twenty years I have developed an ongoing interest in archaeology. Let's be frank I am most definitely of the armchair variety. The reality of a dig and being on your hands and knees in the mud and rain for long periods of time doesn't appeal to me! Despite the fact that there was a lot of harsh criticism directed at the programme from many from within the discipline [justified I'm sure, but to what degree unsure], I still enjoy being able to rewatch all the episodes which are cached on the 4OD website. Over time I have read more in depth articles, completed a short online course and visited the Wind Wick dig on Orkney [this is last year's record of it http://www.orkneyjar.com/archaeology/thecairns/]

Last month I attended a day course on "The Archaeology of Death and Remembrance" organised by our local group. On paper it could have been really depressing, but the speaker was amazing in the way he dealt with a difficult subject with a lightness of touch. Throughout he showed great sensitivity interjected with appropriate dry humour. He made it clear from the outset that he wouldn't be showing any images of children's skeletons and I found it very moving when he commented that often the archaeologists give an adult skeleton a name when they are removing it from the ground. Not only does this give the person back their humanity so their remains are dealt with respectfully, but it also gives the archaeologists a coping mechanism to deal with what is an emotional and sometimes traumatic experience.

Only 80% of all skeletons can be correctly sexed. This is down to the bones not showing some of the normal indicators eg the evidence missing when the person was alive, deformity or the skeleton presenting characteristics from the opposite gender. Our male speaker has discovered he has a female shaped pelvis. Before this can even happen there need to be sufficient bones present and in a good enough condition to examine them...there's a whole of host of factors which often make this impossible.

It is very difficult to estimate the age of a skeleton once they get beyond a certain age and the bones have fused. Teeth is one way, but diet, general health and lifestyle can affect them adversely. Sometimes when records have existed to check against the estimated age has been way out and they have actually been much older. As now, people age at different rates.

Causes of death, unless an obviously fatal trauma injury, are extremely difficult to pinpoint. Some diseases such as leprosy leave tell tell signs on the bones, but this is generally not the case.

Lead coffins are the stuff of nightmares. Usually medieval, the archaeologists risk both poisoning and mental health issues from exposure to the lead. Any sealed coffins which are bulging are left well alone....the body as it decomposes reacts with the lead leaving behind a toxic, explosive mix. Full of pathogens from the original disease I can see why they call in specialist contractors to deal with them!
More of the health and safety issues are covered in this article http://wa-archaeology.com/2247-crypt-archaeology-15-important-health-and-safety-issues/


We were left at the end of the day with the interesting moral dilemma as to what happens to the remains of those who are excavated. By and large the thought process now is that it's best to leave people in situ wherever possible rather than digging them up. With projects such as the Cross Rail this wasn't possible. Even legally the position is not clear. The Burials Act states that any Christian burial [this excludes cremations] must be reinterred in consecrated ground but beyond that there are no definitive answers. The law was passed in 1857 and perhaps now we need to revisit it. It's a difficult one.