Unless you're one of these and then always be a puddin'!! 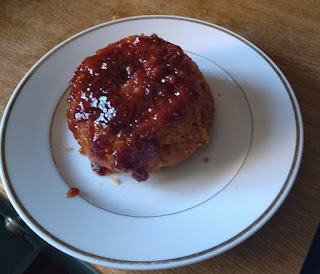 Sunday has been designated "pudding night" here at GBT and it's the one time during the week we indulge ourselves. Mr GBT fancied making a suet pudding, so I donated the recently unearthed jar of homemade raspberry jam [I thought it was chutney...don't ask!] which had turned up after my latest rummaging session.

Bog standard recipe was followed except half the flour was replaced by two slices of stale bread that had been crumbed. It makes the whole thing much lighter and we used the veggie suet we already had in the cupboard. Rather than steaming it on the stove with all the risks of it potentially boiling dry we put an inch of boiling water in the bottom of the slow cooker and then cooked it on high for 4 hours. Much less electricity used that way too.