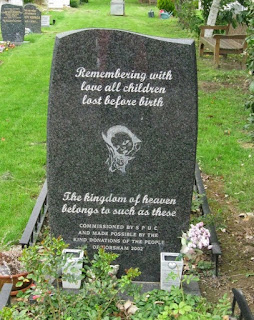 This very moving memorial to all the little souls lost before birth was put up in our local cemetery back in 2002. I'm sure it has brought comfort to many who are grieving over the years. Last weekend I read about a type of grave called an eaves drip grave. It was a term I'd never heard of before, but it's used to describe the burials of stillborn/ premature babies who couldn't be baptised or mothers who lost their lives in childbirth and hadn't been churched [a Christian blessing normally given to women post birth to re-purify them after the unholiness of the sexual act of conception and pregnancy]. This was a Medieval practice which saw these specific types of burials places right up next to the church walls in some areas. Many churches didn't have guttering at this time and in order to prevent the walls and foundations from being damaged by the rain a line of prominent stones were inserted so that the water could drip from them instead. It was believed that because this water had touched a Christian building it had in turn become sacred and once it fell on the graves it would bless them for eternity. For anyone wanting to learn more there is a more indepth paper here http://eprints.whiterose.ac.uk/82807/2/Eaves-drip_book%20chapter.pdf