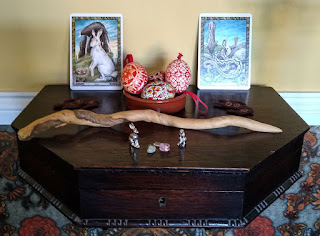 Firstly can I please pass on my best wishes for Easter or Eostre if you follow the Old Ways. I really thought I had nothing that would reflect my pagan path that I could pull together, but a bit of rummaging/lateral thinking and it turns out I've got everything already here. My parents have brought back the beautiful painted eggs from a few trips to Romania they've had, the brown felt hares I stitched a few years ago and the little silver hares were presents from my SIL on a couple of occasions. She's bought me various hare related gifts over the years as she knows I have a particular fondness for them.

So how has everyone been faring during another week at home? I've been enjoying lots of contact and catching up with friends on various platforms. Several themed memes have come my way. This one is a favourite. Being a self employed housesparkler these days and knowing that I've had to reluctantly suspend my work [technically I can clean for others so long as I maintain a 2 metre distance, but at what risk to my clients and my own family? Too high a risk I decided!]. It amused me even more when one of my customers texted me to ask me how I managed to get his shower glass looking so shiny as it needed doing and how much he's looking forwards to my return!! 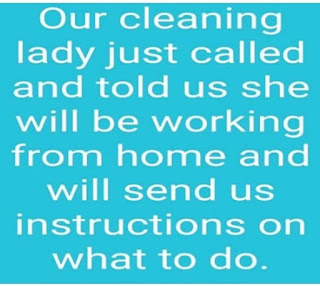 Another much loathed job has been completed with help from Mr GBT...the defrosting of the freezer [not quite as bad as the cleaning of the oven granted!]. Having only looked through it recently you would imagine that I would know what was in there [we're only talking a modest three drawer jobbie here!]. You would be wrong...it was like a voyage of discovery. This woman has an obsession with firstly buying and then later locating the fresh herbs she has bought....there were countless open packets liberally scattered throughout with a lifetime's supply of mint and even chives which I know we grow in the garden! All now correctly matched and given an allotted spot. I have officially declared that if I am seen at anytime in a supermarket poring over these little lovelies in the veg aisle I am to be taken gently by the elbow and escorted out. Damage limitation exercise!!

Much more exciting than herbs was the unearthing of a bag of frozen brownie bites....whatever possessed me to even put them in there in the first place is beyond me. Normally I'd just gobble them up. Using them as a starting place we sliced a very ripe banana, made up some custard which we'd added cocoa to and sprinkled over the chopped up brownies...our Sunday pud [we only do this once a week] sorted from scraps. Even more glamorous were there delights..... 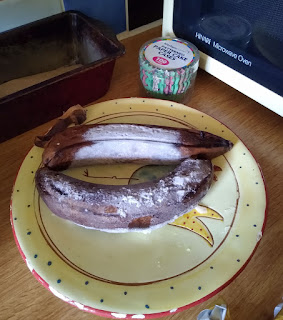 How horrible do they look!! N'er mind...they led to a whole morning's entertainment....you know how it goes...whilst the oven is on fill 'er up!! Apparently my subconscious [without informing me I hasten to add] had decreed that Tuesday was a baking/cooking day....so some time later I emerged flushed, but feeling a little triumphant. Monday Pie, flapjacks, chocolate crunchies and one banana cake later...I'm not known for my love of spending time in the kitchen! My baking also used up the spiced sugar I found lurking in an unused mulling kit for wine which I've probably had since Noah and the ark!

Following on from our heroic joint efforts with the freezer Mr GBT and I combined forces once again to spend a rather more enjoyable hour filling the pantry shelves....I've had an out of date Mamade tin knocking about for ages. Every once in a while I've left it out in a prominent position in the hopes that it might tempt me to get on with it only to ignore it and shove it back from whence it had come. It's amazing how more attractive these prospective projects look under the current circumstances.....Paddington bear and stickiness had nothing on me by the time I'd finished...but at least marmalade sandwiches in abundance are guaranteed for the next few weeks! 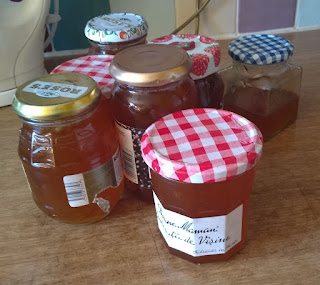 Beyond my domestic trivia and mending I finished embellishing the cardi [already shown in a previous post] and have rounded up some of my UFOs. With time to think I've worked round the knotty problems that made me stall in the first place and am just about to start another one. I'm trying not to scattergun, but finish one thing completely so that I get a sense of achievement. Mr GBT meanwhile has been making great strides. He's been pondering whether to part with £25 to buy a new bridge for his mandolin because of some issue with vibration when he's playing. Now there's a man with woodworking skills and no shortage of wood....ta dah.....one new bridge and no outlay. 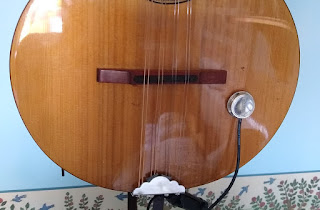 In other news TYM now knows he won't be returning to uni which is a great shame [he's final year]. He's accepted the situation, but misses his mates. At the moment he still has some final assignments to complete and submit which keeps him busy during the day, but like his Mother he is not good at doing nowt. His go-to response to stress is to run [which he does for his daily permitted exercise] and the gym. Clearly with a small house the possibilities for the latter option are limited by what he can physically do, but he started working for one of the takeaway delivery companies last night so he's to be seen zipping around on his bike now in a very fetching aqua coloured livery! He's never been workshy that one. Meanwhile the four legged one is finding the going a little going with the dratted bi-peds getting under his paws all day. He has sought peace from us all and is enjoying a bit of sunbathing on the ammonite at the centre of our non running water feature which retains the warmth rather splendidly. [photo shot from upstairs at distance...he lifted his head up just as I pressed the button!] 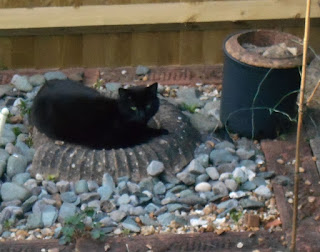 To wind up my waffle we loved this new recipe [even our non potato eating son approved] https://www.lovefoodhatewaste.com/recipe/tangy-chinese-rooster-potatoes [I used dry ginger, ignored the spring onions using shredded savoy cabbage instead and substituted white wine vinegar for the rice version.....I would recommend doing all your prep first as it all happens at once and at the last minute]. For those that may not be aware Jack Monroe is starting a new daily cooking show on BBC1 from 10am w.e.f Monday 13th April for two weeks and for anyone who enjoys doing jigsaws Ruth very kindly left me a comment on here pointing to this free resource https://www.thejigsawpuzzles.com/?fbclid=IwAR39JSe0GlX5Sx7wQua5pnvq1JomVEM88faxRs0Ng47V3cT0JhoYY-A8UY4