It's a small world

With a little more time to spare in the evenings I am currently enjoying the free "History of Royal Fashion" course I have enrolled onto with FutureLearn. It's full of fascinating little nuggets and I have particularly been struck by how the Royal portraits were constructed to convey all sorts of messages. Maybe the eyes painted into Elizabeth I's dress in her Rainbow portrait are not quite so subtle, but for those who are interested this fascinating article gives more detail https://www.npg.org.uk/research/programmes/making-art-in-tudor-britain/case-studies/the-queens-likeness-portraits-of-elizabeth-i?fbclid=IwAR3dGQVst_bmna3cRogpVfIAHEN7xPyOdcveunmwoGxzi2cMkzCaGz1ojyw Imagine my utter amazement as I read down only to discover portrait number 4 was found concealed beneath many years of smoke in a local cottage in 1890. I posted it on our local history group and the current cottage owner responded! She has yet to see the painting as it's currently on loan from the National Portrait Gallery.

The other thing I have learnt is that these paintings are invaluable as a record of the details of the clothing as hardly anything has survived. The Royals at this time passed their clothes onto loyal members of the court and over time they wore out. Garments were expensive so you didn't have many and things were worn until they were no longer fit for purpose! This revelation reminded me of a fleeting trip we made round Tewkesbury Abbey on one of our medieval weekends with Mythago. There were two ladies resplendent in their full Medieval regalia very carefully studying a series of tombs and photographing them. I spoke to them briefly and they explained that it is another way for them to gauge the accuracy of their reenactors dresses and gain further inspiration.

All of this has put me in mind of Lady Daphne Dodderidge's tomb in Exeter Cathedral a couple of years ago. I asked Mr GBT to take some decent photos with his camera as I was so struck by the beauty of her dress and the realistic depiction of the folds in the fabric and lace cuffs. That pose she's striking though looks a tad uncomfortable though...I've seen similar elsewhere and it was obviously all the rage when she died in 1614! I don't think I've ever seen such a tomb in such incredible original condition. 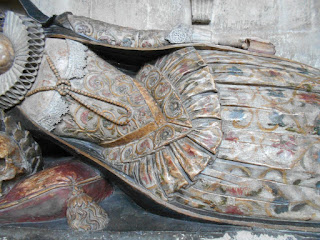 This is actually a double tomb with Lady D's husband, John lying just up from her. I obviously didn't think much of him as there are not photos! However, he was an important man..an English lawyer, a humanist, a justice of the King's bench [known as the "sleeping judge" because he often closed his eyes whilst listening closely to evidence] and an MP for Barnstaple in 1589 and wait for it.....for Horsham in 1604!!! As Horsham was a rotten borough I think it highly unlikely that he ever actually bothered to come to my home town and certainly never lived here as all his residences were in the West Country. For reasons unknown to us he chose to be buried alongside his second wife because he married for a third time after her death. Maybe she was simply his favourite.