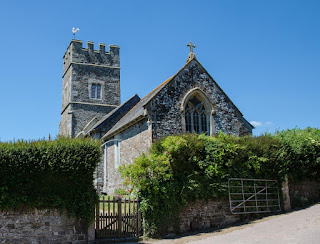 This is the charming St Bartholomew's in Nymet Rowland, Devon and we stayed in a holiday cottage just up the road from it back in 2017. For reasons unknown I didn't cover this in the blog at the time [I tend to only write about some bits before I'm ready to move onto pastures new] and we just popped in late one afternoon just out of nosiness really. Looking for photos of something else I happened across them yesterday and decided that on a whim to share them with a FB churches group. To be honest I didn't think they'd even get the moderator's approval as they're hardly in the league of some of the big guns featured. Imagine my astonishment when a fellow who is an expert in his field and has made a series all about cathedrals that has been repeated several times on BBC4 commented on how much it made him want to go out and about again....it just goes to show that I really know very little still!!

Inside it has retained the original oak arcading which in itself is a rare survival and only one other church in the county still has it. The rather odd stonework is an earlier import from elsewhere and I have vague recollections that it may have been Roman [naturally I didn't buy the guide so I might be talking out of my bottom here I regret!] and the font you can just glimpse in the foreground is a pretty normal Norman girdled tub design made from the local beerstone. 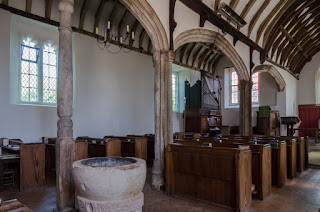 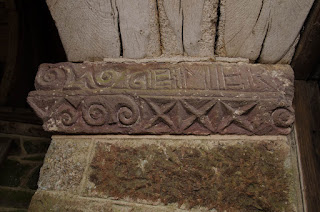 However, this rather plain font has at some point of its life been decorated with some rather wonderful naive folkart decoration with its patterns and foliage. It's all irregular in size and spacing. Whether it was done when it was first made or later I have no idea, but I am guessing this is what garnered the unexpectedly positive reaction online. To be honest I've seen others with a much higher standard of workmanship that has impressed me more, but perhaps it is exactly this...it's local and rough hewn design which is what has drawn people. I still remain a little mystified by it all!! 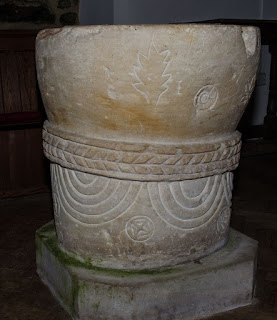 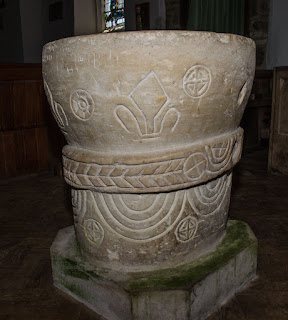 The one local nugget I did learn by sharing these was that the word "Nymet" refers to an ancient oak grove in the area where allegedly Druids may have performed rituals.....now you've got my attention!!