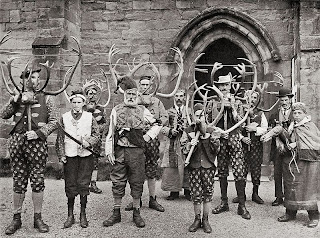 This event takes place today and is first recorded at the Barthelmy Fair in August 1226 so is our longest surviving English folk dance. It always occurs on Wakes Monday[between 6 and 12 September depending on when Wakes Sunday which is first Sunday after 4th September falls] although it was originally held over 3 days.

The Horns are actually a set of 6 reindeer antlers which have been carbon dated to the 11th century but there seems to be some debate as to how long they have actually been in this country. The White Horns are known as Whites with the leader of the dancers carrying the biggest set and the Brown Horns are called Blues.

The side itself comprises of 6 deer men, a fool, a Hobby Horse, Bowman and Maid Marian all in medieval costume and they are accompanied by a melodian player as they perform at different stands around the village during the day. The day starts with a short service at St Nicholas's where the Horns are stored during the year and then they are returned to their resting place at 8pm. It is an event I definitely want to be at in the not too near future....it's on the list!