If you don't like spiders I think it's probably best to look away now. For that reason I'll include the photo at the end!

Mr GBT has been watching the hive of activity over the last few days as the spider has spun her web [from the size I think it is a she as they are bigger than the males and she is probably full of eggs right now] but either she has has been hidden under the eave of the shed or when she has come out it has been too dark! Today though he was in luck.

This is one of our most common spiders- imaginatively called the Garden Spider. It's also known as the Cross Spider.  It weaves orb webs which are the spiral ones familiar to most of us and when it is in view it will always be on the underside of its web. It is harmless to humans. Colour varies from pale to very dark but all have the distinctive cross formed by white dots on its back. 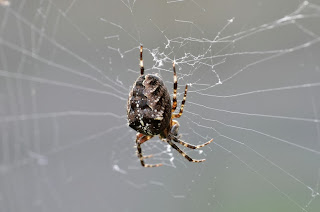