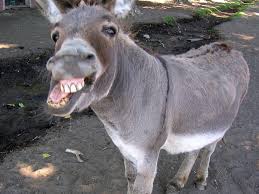 I first made mention of the family donkey, Adolf, last month in my post about whooping cough. Donkey antics done and dusted I thought...that was until I got chatting to my Aunt last night. She's over from abroad visiting my Dad. She was an only child for the first eleven years and she was the little girl for whom Adolf was bought [this was before my Dad's birth].

He had yet more hidden talents...ever the great escape artist he not only got taken down the pub but he regularly used to break into the nearby fields. He fancied himself as a bit of an expert shepherd and used to chase the sheep so that in time he became the bane of the poor farmer's life . However, this was not his worst misdemeanour....

My Grandmother was not a lady of great breeding but she liked to adopt airs and graces in certain company. At this time she and her neighbour shared a gardener called Winkle and on the day in question she was outside telling Winkle what she wanted him to do. She was wearing a fake fur coat of a type that was very popular at the end of the war and which, ironically was, in a colour called Donkey Grey. Whilst talking to Winkle unbeknown to my Nana my Aunt had  arrived back on Adolf- seeing the back of my Grandmother lusty old Adolf misread the signs- aha he thought lady donkey = Adolf babies. My Grandmother only became aware of his presence when his hooves appeared on her shoulders! She was spitting feathers at this point- not at Adolf's rather obvious faux paux but also at Winkle, shock, horror, gasp, who had the temerity to openly guffaw at her predicament!!