..most definitely not granted. Well honest to goodness just look at it- a testament to bad taste. And her "choice" of colours- absolutely humongous. They've been giving me a blinding headache for months! A complete CATastrophe. I hear rumours via the Naughty Tortie club membership [most specifically from Scruffy who owns Frugaldom Towers] that other staff members are considering making such monstrosities for themselves- indeed if the tails are to be believed poor Scruffy is already suffering. Those blessed pointy things competing for my heatpad just skimming across the top of my head clacking away irritatingly and disturbing my peace. It's small wonder how she's missed my eye on occasion- it's been a close shave at times I can tell you! I have, however, discovered that if you embed your claws in the yarn and tug sneakily you can get some quite pretty loopy effects- talking of loopy effects it was worth it just to see her running up and down on the spot, steam coming out of her ears like Puffing Billy ;-) The daft old bat seems to have missed the point entirely- I am simply adding some of my own artistic interpretation to the thing- it's hardly lacking in hideous, fluffy yarns that tickle my nose is it. This is me below last week- I am looking particularly huffy because this [unlike most of the photos she puts up here] is not a posed shot- I sat on the thing in disgust and then got a little warm and a little sleepy. I was most cross to get caught in the act....till next time. 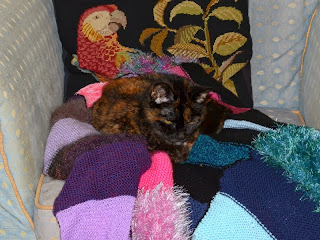