Please don't fall off your perch it's not that kind of announcement...pitter patter of tiny feet type announcements are long since past.  This is Baby as she's been called. 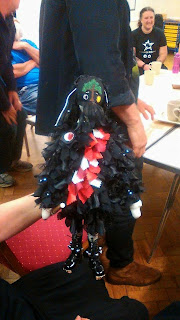 Being a snouty old bird I was beaking around online when I discovered that the The British Museum of Folklore http://www.museumofbritishfolklore.com/  had set up a project last year to create a Morris Dancing archive. Those sides that were interested were sent a blank doll and asked to return it dressed in their kit along with photos and a potted history. Rather gingerly I mentioned it to Mythago and was delighted that they were keen. J took up the challenge and has made a superb job of it. Initially the New Rocks foxed her but M, who's an amazing leather worker, stepped in and saved the day. Here's me in my get up for comparison purposes. I believe that there's to be an exhibition at some point over the summer. 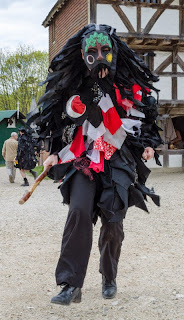