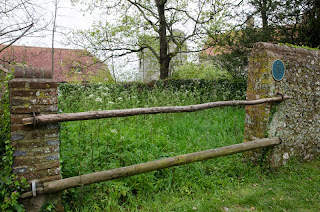 Hardly eye catching is it yet this enclosure was an important feature of the English medieval village. The local pound where stray animals were rounded up and kept until their owners paid for any damage done to the owners of the land upon which they'd been found and any charges incurred for their food and care whilst they were held. If nobody came forward within three weeks the animals would be taken to market and sold with the profits being split between the landowner and the impounder. This surviving example is in Wilmington and was restored in 1980. It was often used to hold donkeys that had wandered onto Dartford Heath!