Not two words I have ever had cause to use together and not two words that I have ever encountered until this year. Both describe my abode rather splendidly. I am a tidy person and not a hoarder but there are certain key elements that change a house from a home.

Firstly Tsundoko. This is Japanese and apparently means a pile of books. Now I the proud owner of my very own pile of books- granted it is hidden away in the base of the spare room wardrobe out of sight but it is plundered regularly for reading matter that is of course unless another tome catches my eye which is an all too frequent occurrence in my world. I said I wouldn't buy any books from the charity shop nor Amazon this year [I've managed to stop buying new books but that hasn't stopped me acquiring them still] until I had tackled my pile. Apart from one cookery book that slipped under the radar at the recent jumble sale [that's not a charity shop right!] I have been true to my word but still books find their way to my door and would I want it any other way. Absolutely not- far too sensible an approach for me. Instead I've been sneaking into the library, borrowing books from my parents [despite passing others on to them], been bought a book as a surprise gift and have just been given three books which were duplicates. The Tsundoko stays!

Then there's trumpery. A rather marvellous word meaning trinkets and baubles [some might cruelly say tut but I am ignoring those naysayers]...you know all those personal effects that bring you pleasure but aren't necessarily worth much money wise. That's another continuing process as I declutter some to the charity shop and then purchase another little treasure that has caught my eye. I do have a lot less than when I was younger but trumpery remains an essential part of my make-up. Here's an example of my trumpery- pretty threads displayed in a golden bowl. The colours give me a boost whenever I catch a glimpse of them in passing. 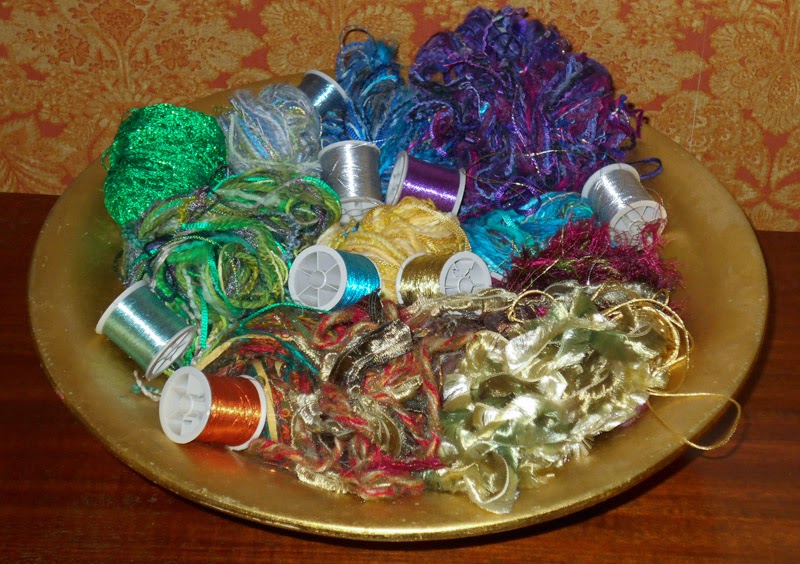