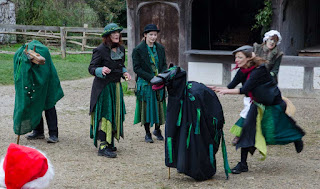 Hoodening, or oodening as it is sometimes called, is a tradition specific to East Kent. As with many of the Christmas Mumming type performances, it is another comedic play which centres around the themes of death and resurrection with a lot of topical references thrown in for good measure [not a million miles away from panto really!]. Its origins are murky, but the play was originally performed by farm labourers for money and later on absorbed into the Morris tradition.

The central character is the hobby horse which, unlike the Mari Lwyd horse, is a wooden head rather than an actual horse's skull mounted on a wooded pole and covered with sack cloth. The general cast include the Groom [he carries a whip] who leads the horse around, a jockey who makes several failed slapstick attempts to mount and ride the horse and a Mollie figure who is portrayed as a simple soul with her/his broom as it is customary for this to be a chap dressed up. This version by Rabble is unusual because it features a lady Mollie and two horses.  Despite it dying out by WWI it's been fanastic to see sides such as Rabble, breathe new life into it and drive its revival. It makes for fabulous family entertainment and is always great fun to watch! 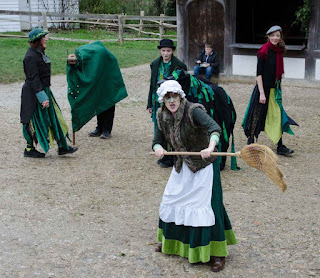