According to the Pottermore site, the Niffler is a British magical creature. Mole like in appearance, it has a love of all things sparkly and although affectionate, should not be kept within a domestic setting due to its destructive burrowing habits. Too late, too late I'm afraid for look who joined us here last week at GBT! 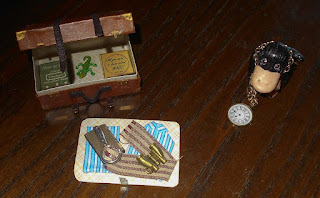 It is very possible that you have no idea what I'm nattering about....this character features strongly in J K Rowling's "Fantastic Beasts" film and I fell in love with the little devil when I saw it last year. Earlier this year I discovered that one of the lovely miniaturists I've worked next to at shows a few times makes a 12th scale version. She has kindly made me my very own one, so this is my very own un Christmas present to me from me! I am rarely so rash with my hard earned groats, but occasionally a treat such as this is good for the soul methinks!