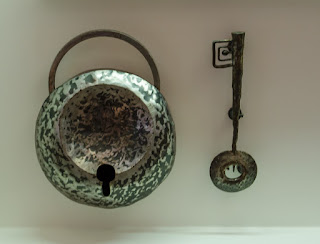 Keys...such an ordinary, everyday object and yet one most of us are reliant on. How fast does it all go downhill though when we lose them or lock ourselves out!

The first "keys" can be traced back to the Egyptians, but not in the form that we would understand them. It will probably come as no great surprise that the terribly organised Romans are the ones behind the lock and key as we use them today. The first ones were a wooden pin system, but over time they evolved into the longer lasting metal form.

Beyond the obvious representation of opening and closing there's quite a lot of folklore attached to this humble item. I've just picked out a few random ideas which caught my eye.....

Don't leave your keys on the table otherwise arguments and chaos in your home will ensue [there seems to be a whole raft of things you mustn't leave on the table including shoes?!]

Keys left in the bed were supposed to help women with childbirth....not great if you happen to lie on top of them though might I suggest!

Very old keys were deemed to be good luck amulets...some wore them around their necks, especially the wives of sailors left behind on land.

If you throw a bunch of inherited keys at a door with an eavesdropper the other side that person will become deaf for life.

I meanwhile clank around like Marley's Ghost at times with keys to various properties which I clean. Each one has an identifying colour on it, but obviously no personal details! With that responsibility I keep them in a separate place from ours and am very mindful about making sure I return them there when I've finished with them.

The photo was take in the Welsh Assembly in Cardiff.
at December 07, 2017