Hoards....there is a bit of theme emerging here....not me becoming a hoarder I hasten to add but me visiting them- last month a Saxon one this month the Cheapside Hoard at the Museum of London.

The hoard of late Elizabethan and early Stuart jewellery was discovered by workmen buried in a cellar in Cheapside in 1912. It was known to have been an area of goldsmiths but why it was there is open to interpretation. The building was certainly owned by a jeweller and one theory was that this was his stock which was buried before the outbreak of the Civil War but quite why it remained there is unknown. The rediscovered jewels were spread out between three museums and this is the first time they have ever been seen together in public. 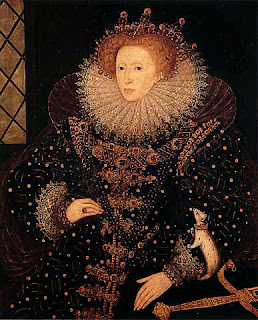 It also taught me what a farthingale was- an underskirt support used to achieve the desired silhouette of the day. We spent some time looking at this particular portrait of Elizabeth trying to fathom what it could have been from the description of the placement of the jewels. In the end we decided that perhaps it was something worn on the head!

The jewellery itself is displayed simply in clear glass cabinets which do not detract from their sheer beauty but also allow for close inspection to admire the workmanship. The detail is stunning- very thin gold wire embellished with dainty enamelled flowers in long chains were actually stitched to the clothing. 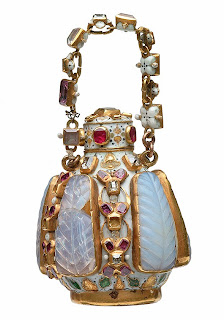 Pendants galore- the grapes were made from emeralds but they also had ones made from amethyst. 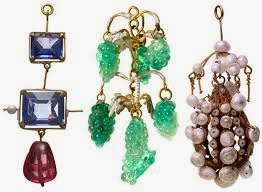 And my favourite the hexagonal emerald watch and the watch made by G Ferlite. 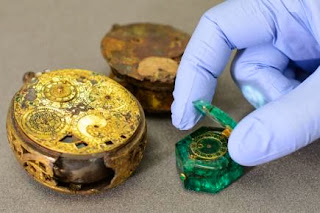 The thing that really struck me was the belief system attached to different jewels- in many ways it is reminiscent of those who use crystals esoterically. More on that in a later post......