Man of the Woods? 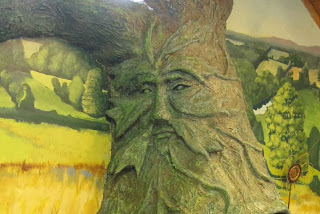 Whilst away I came across an interesting theory as to how the greenman came to appear in the Norman churches. Rather than representing a nature deity, this idea places the foliate head firmly in the political sphere as a symbol of political resistance. For ten years after the Norman Conquest in 1066 the English rebels continued a campaign of guerilla warfare against the new rulers. They hid out in the English forests [in a similar vein to the Robin Hood tales] and were known by the Normans as the Silvatici or "men of the woods". Was is possible that the stonemasons were showing their support by carving their faces in the new Norman buildings? Certainly greenmen in other cultures were already present but perhaps this is a reflection of how it developed here in good old Blighty.

Whilst on my favourite subject I have remembered that there is a map available for fellow enthusiasts.
http://www.countryfile.com/countryside/green-man-map

Never let it be said that I don't know how to spoil you!!!