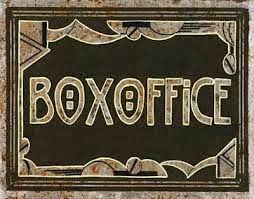 In the Elizabethan era plays were performed at 2pm. Groundlings i.e. those who stood on the open ground near the stage paid a penny, those who sat down paid an extra penny and those who wanted a cushion paid a further penny. All monies were dropped into a box that was taken to a special room for safe keeping called the box office.