Peter Labilliere was born in Dublin in 1725. He became a major in the British army and after leaving, a political agitator. Although never tried for treason he was accused in 1775 of bribing British troops not to fight in the American War of Independence. In later life he moved to Dorking from London and was a regular visitor to Box Hill where he used to walk and meditate. On one occasion he fell in undergrowth and lost the sight in one eye.

As he grew older Labilliere became increasingly odd and stopped washing to the point where he was nicknamed "the walking dunghill". However, people often commented upon his kindness and he was often known to buy clothes for those suffering that he met.

Upon the occasion of his death in June 1800, he was, as he had requested, buried up on Box Hill head first. Some claim that this was because  he believed that the world was topsy turvy and one day it would right itself. However, it seems more likely that the decision was made based upon his religious beliefs- he was a great admirer of St Peter who requested that he be crucified on an inverted cross as he did not believe himself worthy of dying in the same manner as Christ. This is the memorial stone that records Labilliere's internment- it is unlikely that it marks the actual burial spot. Interesting as an aside there is also a horse buried upside down on Box Hill but there is no connection between the two! 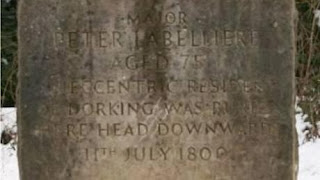 For a long time there was an annual celebration to mark Labilliere's passing with a picnic and dancing. This tradition has been resurrected and I hope to dance as part of it with my Morris side next June!