A Stone's Throw Away.

Having no work commitments on Tuesday and due to Arty L being poorly, I was left with an unexpectedly free day. Frankly I'm a bit rubbish at the concept of a day off...my ridiculous Protestant work ethic gnaws away at my conscience and berates me if I think of being anything other than productive. Thankfully I ignored the nasty little voice and kicked my heels instead.

I'm one of those people who enjoys the company of others, but equally enjoys her own company. It's good for the soul to do this once in a while. Trundling about here and there I relished the freedom of making up destinations as I drove along. After a couple of pitstops along the way I eventually wound up in the local village of Wisborough Green.

Poking around in the church of St Peter ad Vincula I was delighted to see this well preserved wall painting. It is thought to date from the time of King John and to have been covered up within a few years following on from one of the many transformations the church has undergone. Long since forgotten it re-emerged in 1867 after two workmen brawled over a local lass....one lobbed a stone at the other and in the process dislodged some of the filling that had kept it hidden from view. 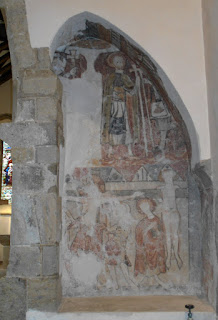 Referring to the description in the guide book the figure at the top is St James with his pilgrim dress and cockleshell badge and below an unusual depiction of Christ sharing the crucifix with two thieves. He is being offered vinegar by a soldier and St John is shown beside him. The colours are much stronger than in other examples I've seen in the area.