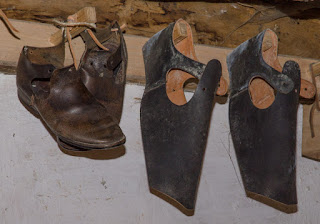 Easter Sunday revealed my Father wearing a new pair of shoes....a rather more pointy toed version than normal. His faithful old pair had split across the sole and shoe buying last week had revealed that everywhere including the "traditional" stalwarts, such as Clarks, is all favouring winklepicker lines at the moment. At 71 I don't think Dad was that thrilled at the prospect of walking around with toes like the genie out of Aladdin!

This whole episode has put me in mind of when I was a Bright Young Thing....W and I paid a visit to Shelly's, the famous shoe shop, in the King's Road. Triumphant I emerged with to what- to- me were The Thing to be seen in...back in the day when my bands of choice were The Cure, The Jesus and Mary Chain, Joy Division and other such hearty soundtracks, a flat black shoe adorned with a silver buckle and toes so pointed that the angle of them meant they never actually made contact with terra firma were my footwear of choice. I thought I looked like the dog's doodahs...possibly in reality more like a walk on part in a panto, but they were blissfully comfy.

The original medieval version of these were called poulaines or crackowes as a nod to the Polish wearing noblemen who came to pay homage to Richard II's Polish wife, Anne. After the trauma of the Black Death in the 1300s, something so frivolous must have seemed like a bit of light relief and people took to the new fashion with great gusto. Those who lived permanently in the killjoy sector of society [conservative is the polite term I do believe] inevitably disapproved as they believed the wearers to be feckless and lazy, hence the name of devil's fingers. In reality they were probably not that practical as they could be hard to walk in. The men stuffed the toes with hay or moss and supported them with whalebone struts. By the reign of Edward III the Sumptuary Laws specified that commoners could only wear toes up to a length of 6" whereas a gentleman was permitted to extend his to  15" plus. I would have loved to have witnessed people trying to get past one another in a narrow space!