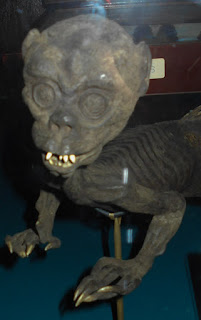 Ugly little blighter isn't he! This is the "merman" from the Horniman museum and probably one of the most famous objects in the collection. We were lucky...often he's off on tour so we were fortunate to catch him chillin' at the bottom of a very dark case in the dimly lit Centenary Gallery. Most recently he was spotted on the latest series of QI in the episode "Monster Mash".

The original mermen and mermaids were created for the Shinto shrines and represented the ningyo which were the water sprites of Japanese folklore. However, this one is an old fraud...it was made for the European export market and was used by the unscrupulous Victorian showmen to part their punters from their cash. This example was bought by the Wellcome Collection in 1919 and was catalogued as a monkey fish. However, my pal Goggle tells me that the latest research has blown this theory out of the water. The animal parts present have been tested and the DNA is most definitely not primate in origin. The jaws and tail are from a fish [species as yet unidentified] and the claws are avian. As for the rest? A bit of clever jiggery pokery with paper mache held together with wooden supports. 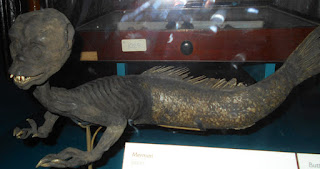 I am most delighted to have made his acquaintance at long last. More to follow on the unusual contents of this quirky Victorian museum in a later post.