St Frideswide is the patron Saint of Oxford. Believed to have been born in 650, she was the daughter of Didan, an Anglo-Saxon king. She became the Abbess of a Priory which is now incorporated within the cathedral of Christchurch. Many tales abound of how she was pursued by various suitors keen to gain her hand in marriage and the various places she had to hide to evade capture. Algar, the Mercian King, supposedly hunted her down until he was blinded or if you believe the alternative version he fell off his horse at the gates of Oxford and broke his neck after he had flushed her out of the forest where she had been lying low.

Whatever version takes your fancy [or none] she was being venerated as a Saint by the beginning of the 11th century. John, the Oxford carpenter in Chaucer's Miller's Tale invokes her as his saint. This is her shrine in its present form. 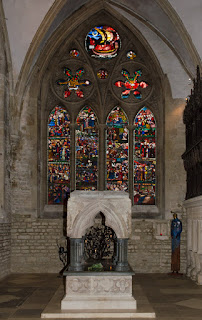 It has had a somewhat chequered history. Built originally in 1289 it was then destroyed during the Reformation. Over time pieces have been rediscovered and it has been rebuilt. The base is original and shows Frideswide hiding in the forest but the rest consists of later additions. When first built it would have been brightly coloured. However, today it is covered with several curious foliate faces. 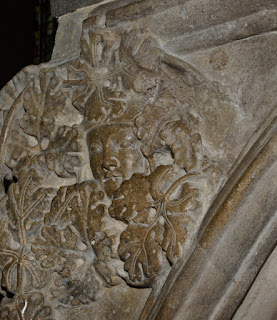 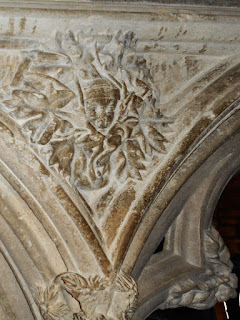 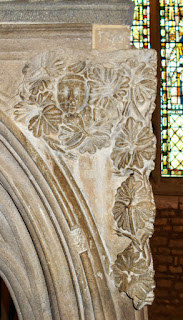 This is a modern depiction of the saint made from a railway sleeper and a detail from the Burne-Jones window behind the shrine which shows her ascending into heaven in a boat. 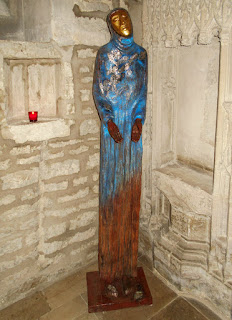 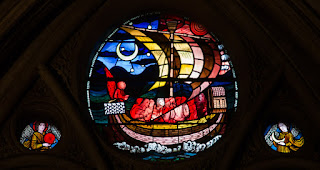 Her saint day is 19th October which is supposedly the date of her death. Her remains are believed to be buried within the church floor but the exact location is unknown.