It's been a while since I've done any folkloric posts, so high time to resurrect the genre methinks! Following on from the slug range of colours we endured in January [I'm talking about the drab, grey days not when the sun shone] and the muted whites of snowdrops, it was with great relief I spotted a shot of blue in the hedgerows whilst out on my recent walk at West Dean. Sorcerer's Violet or Periwinkle as many may know it. 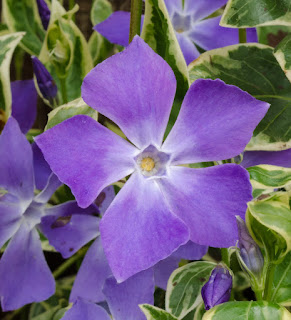 Chaucer referred to it as the "fresshe pervinke, rich of hew" and in France it's called Pucellage [Virgin flower] as a nod to its colour. My personal favourite is Fairy Paintbrush.

As with many other flowers, it is supposed to give protection against the devil and witches, but in Italy it is a flower of death with heretics being led to the stake wearing them. As an evergreen, it was also believed to represent immortality so garlands were often placed on the coffins of children or planted on graves. If you uprooted them then you would suffer nightmares or be haunted by the deceased.

However, it's not all doom and gloom...dried out and mixed in powdered form with leeks and earthworms if you're canny enough to slip this delicious sounding concoction into the food of your Dearly Beloved you luck might be in as it was said to produce love between a man and a woman. Well according to Albertus Magnus in his tome the "Boke of Secretes". Earthworm anyone?!!