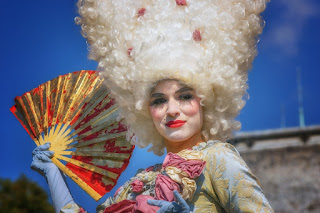 Nowadays the term "bigwig" isn't a complimentary one, but when it first came into usage it meant a very important person who literally could afford the biggest wig made from human hair [horsehair was for those of lower means]. People have been dressing their hair for thousands of years and adapting their styles to meet the changing whims of fashion.

Currently it seems that we're obsessed with hair removal in parts of our body [even inside nostrils now I gather] and then having extra hair in others [eyelashes, big beards, hair extensions] and dyeing it the most fabulous range of colours. I was a little flummoxed when a much younger family member coloured her hair grey when I'm here adding in pink foils to deflect some of it [not possible under the current circumstances]. It did look amazing though I have to say. It's not the first time that grey has featured as a fashion colour either. The later 17th century Kings wore grey wigs and even today members of the legal profession still wear them to add formality and an air of wisdom/experience to the court proceedings.

Typically the only wig I ever wore was a long burgundy Cher one for a fancy dress charity fund raising event at work some years ago...that'll be about right!!