We were just out of area on Saturday morning running An Exciting Errand [more tomorrow!], so whilst in the neighbourhood I thought it would be rather rude not to pay another visit to St Mary Magdalene's Church in Bolney. Since the last time I paid a flying visit as part of an organised walk I have learnt a little more history about its rather impressive double width lychgate which was built in 1905. 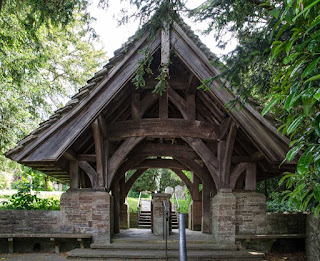 The entire thing is built of Sussex materials from its oak frame through to its Sussex "marble" [not really marble, but called so because of how well it polishes up] aka winklestone and that Horsham Stone roof.....as promised in yesterday's post!! 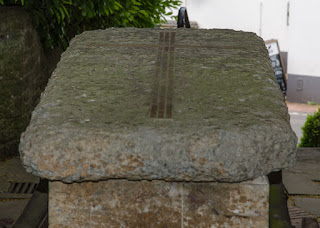 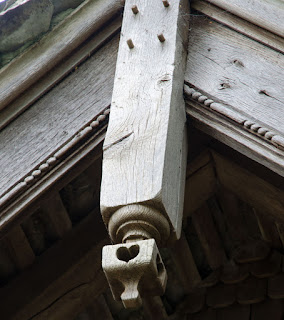 However, of most interest to me is the reputed reuse of the timber from the village smockmill that once stood on the common. Certainly its millstones have been put to excellent decorative effect either side of the gate. The local vineyard now makes a wine called "Lychgate" in honour of this local landmark. 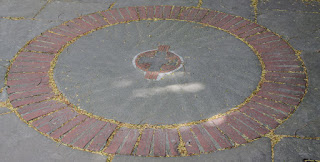 Whilst nosing around I noticed lots of these rather odd diamond shaped stone finials on the corners of lots of the graves. They rang a bell and being sure I'd read some juicy snippet about them quite recently, I took a photo of them to remind me to look it up.

As it turns out I had taken a photo of something noteworthy, but for all the wrong reasons! These oh so exciting stones turned out to be unique to the churchyard and are very imaginatively called "Bolney stones". Had I been a good explorer and done my research beforehand I would have understood that what I was looking at was actually one of several examples of a barrel gravestone. Although this type of grave appears in many places, these ones are especially significant because they are so early. They date from the 1600s and it is suspected that they may have been for the then local dignitaries. Had I been au fait with this information I might have taken a group shot!! However, it is highly unlikely that I will change the way I do things because it strips away some of the spontaneity and fun of finding things!