So here we are another week I think successfully done on a shoestring budget. If you're not too bored this is more of the GBT doings!

House wise I made a valiant start on deepcleaning the kitchen...one cupboard became my priority after sadly finding the expired mouse that Humphrey had released a couple of days before at the back of it. Thankfully my other discoveries have been of a much happier nature. I shuffled things round in the larder and came across a jar of something brown and unlabelled [always helpful that!], so with some trepidation I took the lid off only to find it was some delicious homemade apple butter that I made some time ago. That is going to reappear mixed with custard as a spiced apple fool for our Sunday pud this weekend. I've repurposed the big glass biscuit barrel which has been sat empty for months as a dried pasta storage jar which has given me more space. The best surprise was this though lurking at the back of the drinks shelf.....

We keep the homemade wine out in the garage so it's only liqueurs that sit in here. I've been on a mission to finish as many bottles as possible which have had only a small amount in for far too long before opening anything else. Mission accomplished [our recycling bin makes us look like a family of hardened drinkers at the moment!!], but I've been ignoring this one as for some odd reason I thought it was Harvey's sherry. A moment of delight when I found out that it's actually an Australian Shiraz. It was the perfect accompaniment to our road's VE day celebration.

As you know we've been out every Thursday clapping for the NHS and this extended to a "bring a glass of something good out" and sing "We'll meet again" on Friday night. It was a warm evening and many of us stayed out for a good hour or more getting to know our neighbours. I have discovered that I am blessed with being surrounded by some delightful people. A lady across the road has lent TYM some kettlebells for his garage gym that she doesn't use and we were able to repay next door's kindness with their recent seedlings with a few of our extra raspberry canes. We all observed social distancing, but did get a tad squiffy as we dashed inside to top up our glasses!

Food wise. I haven't been experimenting this week, but I am going to give a recipe for chocolate brownies using a tin of chickpeas that doesn't need any flour a whirl next week. Digestives went into the baking tin and we enjoyed our first harvest of homegrown radishes tossed in honey and lemon and roasted alongside our main meal when we had the oven on. I'd made the biscuit dough the day before and put it in the fridge to make sure that I was filling the oven and making the best use of the shelves. TYM came and snaffled the two little stars...he muttered something about quality control😉 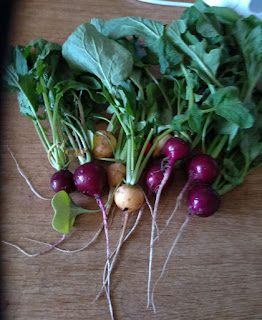 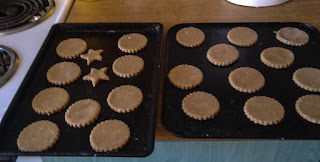 Making wise the current Grayson Perry programme spurred me on to pick up a pencil again. I've had an idea floating around my noggin for months involving the Norman beakheads you find for ages, but I don't know at this stage whether it will manifest as some type of stitched cushion cover or a picture. Anyway this apparently is what I wanted to draw....the resistance to doing so and just having a go was enormous. I gave art up at 14...it took me 4 days to pluck up the courage and then after I did there was a totally unexpected emotional aftershock. This is last week's efforts...not good, but not as dreadful as I had expected so I shall definitely be doing more. The one thing that has come out of this situation is the realisation as to how busy I've kept myself for years so that I don't risk trying [and more importantly failing] at too many new things. I now know that I can do a lot more than I think and I have promised myself that I'm never going to let that happen again. The other thing that I've decided is that anything I make has to be something that I truly want to do. A bit more stitching got completed....a star from cut up clothes with a scrap of lace dyed in cold tea and a work related mask from an old duvet cover and elastic saved from other projects. No picture needed of that one! I also have made my Dad a birthday card, but can't show you that yet as he hasn't had his big day yet! 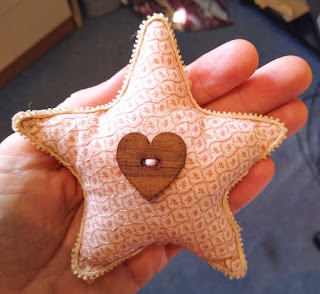 Next on the making horizon is going to be something based loosely on this cat that I saw outside a house on one of our evening strolls. I immediately fell in love with it and got the "I wants". Married to a cabinet maker means that we have the right kit to make this happen and plenty of scrap timber.....we'll do our own version using these old tongue and groove plants that once upon a time made up the side panel to our old bath. 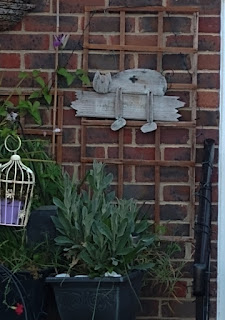 Today my claim goes in for the government scheme they invited me to apply for last week. Thankfully I am eligible so when the payment comes in June that should help. I am gradually and very carefully returning to work now [if the situation deteriorates I will immediately stop again] where appropriate. Many I shall not return to until such time as their circumstances allow, but everyone has been incredibly supportive and we've had long discussions about how to go about this in the safest possible manner for all concerned. One lady has offered me light outdoor cleaning and tidying as an alternative to help me out. They have all been incredibly loyal at a difficult time for everyone.

To finish on a lighter note....if you have lots of pinecones and a waterbutt that needs some jazzing up why not go for this idea....I really do encounter some unexpected sights sometimes on our evening walks! 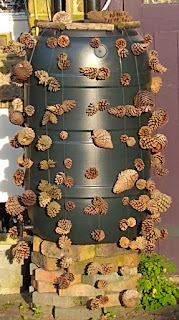