Sometimes a gift from a friend has no monetary value but is much more special because it means that person has really thought about what they are giving you rather than just randomly grabbing something off the shelf in a shop.

A couple of weeks ago I mentioned that I would like to have my own hagstone one day but on my rare trips to the coast I've never yet found one. Within a couple of days a Morris Dancing chum produced this out of his pocket and gave it to me. Our cheeky drummer quipped "well that was just a stone until a moment ago but now you've got it it's a proper hag stone"....pray what was he implying...surely it is a well known fact that I am a well established hag although one prefers the term crone....it sounds more genteel somehow! 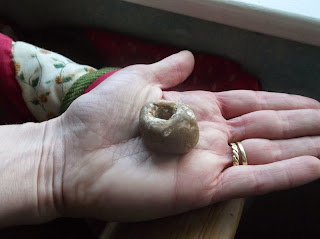 I've had great fun looking through the hole and enjoying the different perspective the narrowed view gives me. It is quite incredible to think just how long it must have taken for the water to bore a hole through the middle of it like that  and I can really see how they were and continue to be treasured amulets for some. Obviously this has led me to poke about on google. Please allow me to impart my findings.

Such stones have featured throughout history in different cultures. Holey stones were found in ancient tombs in Gaza. In England [there are Welsh and Scottish names too] they've been known variously as witch stones, holy stones. Wiki also refers to them as adder stones but I'm not entirely clear whether they are actually the same thing. Anyway I digress.

When walking past a local house in the countryside last year I noticed it had a whole string of them hanging in its porch. I now find that they are regarded by some as good luck symbols and for protection. In earlier times it was believed that if you had one by your bed it could stop nightmares and stop the night hag from stealing your power when you slept. Superstitious Dorset fishermen [all fishermen seem to have different rituals they enacted to try and protect their lives in different parts of the country. Hardly surprising when you were at such personal peril so much of the time] had them on their boats to keep witches and evil spirits at bay.

As is often the case hagstones were imbued with medical powers. Rubbed on wounds and broken bones they were believed to heal and could be used to cure whooping cough. If you wore one around your neck it could keep away illness.

Nowadays they feature within Paganism as a meditation aid as concentrating on them can allow you to shift your level of consciousness and leave your everyday thinking behind for a temporary period. Some claim to be able to enter the fairy realm and other alternative realities. It's not something I've ever experienced but I am, as ever, open minded about such matters. For now though I shall just continue to enjoy its tactile qualities as I handle it and peeking through the hole when I think no one's watching me!