Necessity is the Mother of all Invention.

The quote that makes up today's title is a personal favourite of mine. It never ceases to amaze me what the human race can achieve when they are up against it.

In October 1939 Orkney suffered the tragic loss of 834 lives when HMS Royal Oak was sunk by a German U Boat which had managed to break through the defences in Scapa Flow. Drastic action was called for and extra boats, taken out of commission, were deliberately sunk to block any existing navigable routes. I personally found these rusting wrecks quite disturbing. 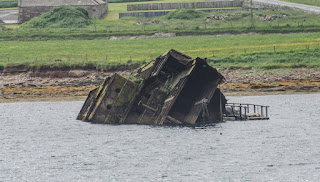 Further defence measures saw the construction of the so called Churchill barriers which linked four of the islands by the Italian prisoners of war. Built from huge blocks of concrete it must have been backbreaking work for men away from home living in an environment far removed from their familiar Mediterranean climate without loved ones. Their need for the support of their faith and a dedicated place of worship was recognised by the far sighted camp commandent Major Buckland and he gave the green light for an Italian chapel to be built. An artist, Domenico Chiocchetti, was given permission to gather a group of craftsmen from the barrier builders on the understanding that the remaining prisoners would take on their workload and from there they created this beauty. 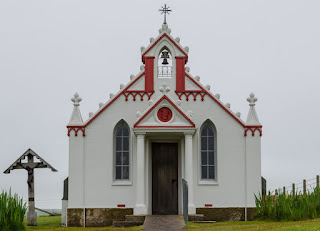 However, things aren't always what they seem and the chapel is a triumph in the art of illusion. This is it from the side view and it's actually two Nissen huts. 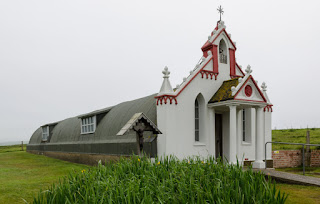 The interior is equally stunning as these small selection of photos show. Again all the effects are created by a clever use of perspective and Trompe L'oeil. Many of the images are based around peace. 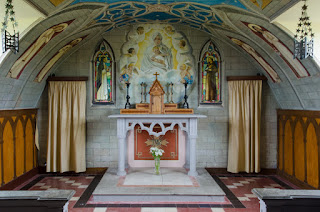 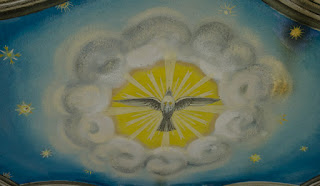 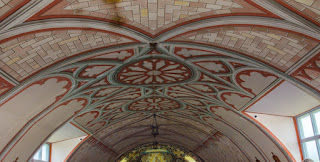 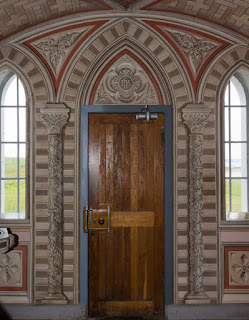 Lacking access to items with which to furnish the building the prisoners were forced to think laterally which they did with great skill and aplomb. Beyond the innovative use of paint effects the prisoners swam out to the the block ships and plundered them for metal. The candlesticks are made from stair rods and the lanterns from bully beef tins. 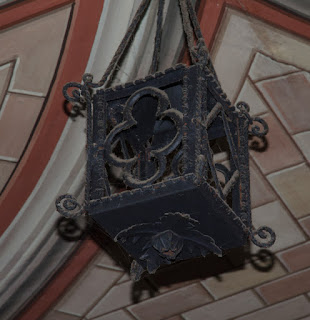 Originally more than one chapel was built but the other one was destroyed. Chiocchetti returned in the 1960s to repair this one and it continues to be used today by the islanders for weddings and the families of the original POWs who regularly return from Italy. Last year three of the stations of the cross were stolen. Despite appeals for their return these fell upon deaf ears. Amazingly though the Chiocchetti family were able to get replacements made by the original firm.

A little bit of Italy lives on in Orkney.