I am guessing that Ingvar Kamprad cannot have imagined in his wildest dreams that he would launch such a successful empire when he founded Ikea. "Easy" [that point is debatable methinks] to assemble furniture, innovative storage designs, lots of fun and funky items which transform a house into a home. He is now listed as one of the wealthiest people in the world yet his idea, although innovative for the time, was hardly new. Turn the clock back 5000 years to a time before Stonehenge and the Pyramids and what do we have.......

Why flat pack furniture and built in cupboards............Skara Brae 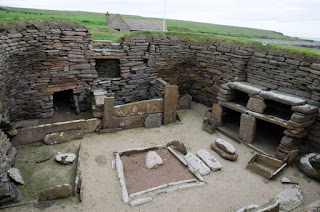 Box beds, a dresser with a hidden storage space behind to conceal treasured items [sounds like a stone age safe to me!] and cupboards which would have had to be planned as part of the construction of the external walls. Due to the delicate nature of the houses you can't wander around them but the reconstruction below gives you a good feel for what it might have looked like back in the day. 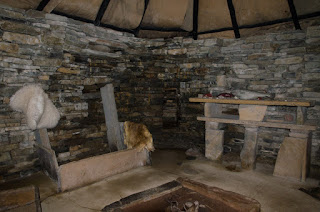 The visit was fascinating I have to say but a little too sanitised for my liking [a bit like when you go to see Stonehenge] so fickle bird that I am I have to say that I enjoyed Barnhouses just as much even a little more. Although they are less complete you can wander around and still get a feel for them in the context in which they were built- if you look in the background you can see how close they are to the Stones of Stenness. 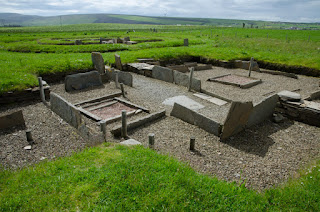 Like us our ancestors were filling their houses with all sorts of bits and bobs that put their individual stamp on their homes. One of the houses at Skara Brae still has a visible pattern scratched onto the bed ends and the finds show they had time on their hands to create and decorate items. I strongly suspect that originally there might have been some form of paint on the walls here too as found at the ongoing Ness of Brodgar dig. The photo shows pots made from oyster shells, whale vertebrae amongst other materials which still contain red ochre mixed with animal fat. 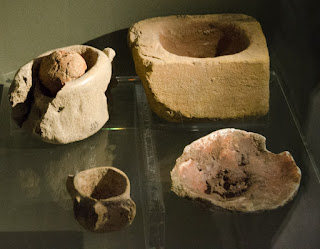 This pot has been made based on pottery shards found and the patterns were made using shells and bones. 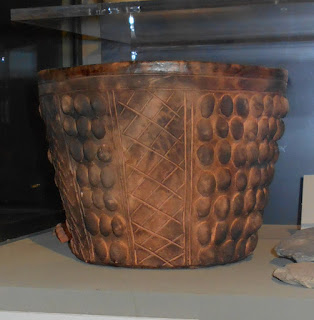 Neolithic jewellery and beads made from various materials including a dog's tooth. 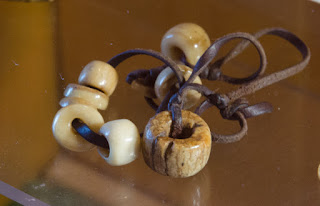 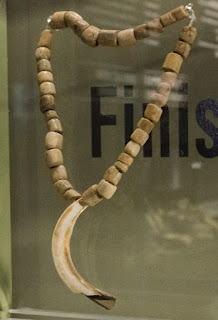 A mystery object. When I mentioned to the chap from Scottish Heritage that I had seen similar examples in the British Museum last year he said that he'd recently had a conversation with a fellow who's seen these type of carved stones being used like talking sticks in certain African tribes. 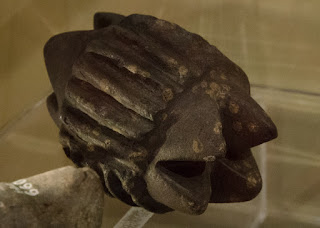 Finally this antler pick which beats all the others hands down. It's got some incised marks at one end and incredibly I was allowed to handle it. Instantly it reminded me of how I've drawn spirals on my Morris sticks so that everyone knows who they belong to it. Loved the feeling of being in touch with my ancestors. 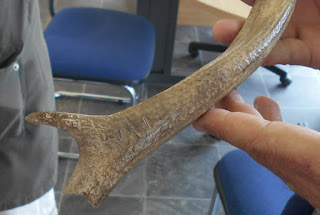 The exciting thing about the Neolithic history on Orkney is it's evolving all the time as more discoveries are made year on year. You can keep up to date with all the latest news on the archaeology blog which covers the  Ness of Brodgar annual dig here http://www.orkneyjar.com/archaeology/nessofbrodgar/