So now you know.

I just love finding out the origins of some of the everyday phrases we use which when you step back and really think about them frankly don't make a lot of sense. I've been saving these ones from the past few months until I had enough for a post's worth.

Frog in your throat

It was believed that if you gargoyled with dried frog mixed with white wine this would cure a throat infection.

From the days of smuggling. Contraband was hidden down long boots- although the customs men would pat you down searching for goods they were unlikely to check your footwear.

Gin [then called Jenever] was supposedly invented as a cure all for ailments such as lumbago by Franciscus Sylvius and was sold as a medicine. Soldiers from the Low Countries took it to control their pre battle nerves and give them the courage to fight.

Top Dog and Under Dog

Both come from the positions the men had in the saw pit. The underdog was the poor fellow who stood in the pit beneath the log and got covered in sawdust. 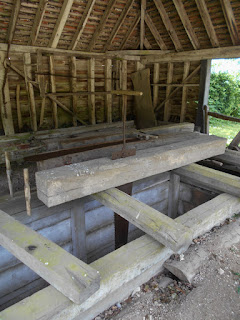