Looking At A Load Of Old Stones.

Well for once I have to agree with the teenager's summary of our time spent on Orkney but without the rolling of eyes and the mildly disparaging tone in which the original words were uttered! To be fair to him he has seen a lot of stone circles in his short time on the planet and therefore, is perfectly entitled to be feeling henge fatigue.

At 5000 years old this is believed to be the oldest stone circle - The Stones of Stenness. Although only a few remain now they are impressive. Unlike the big blocks at Avebury the local geology means that the standing stones are very thin when viewed side on. Within easy access of the road they form an integral part of the Neolithic landscape. I really enjoyed the way the sheep were grazing in and around them. The ancient and the modern co-existing happily.

This is the entrance. 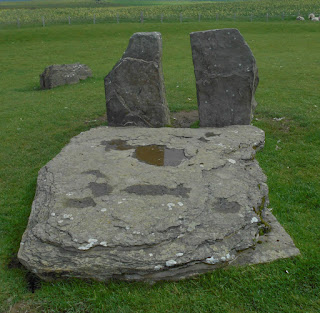 Of course where would a visit to Orkney be without a visit to the Ring of Brogdar if you are a megalith fan like me! This time we took a slightly different tack and went on the daily walk/talk held by the local ranger. There are several walks held during the summer and all are free with no need to pre-book. I can thoroughly recommend going on one if you're visiting.

Originally it was believed that the Ring had 60 standing stones but now only 27 remain. However, the latest thinking is that this wasn't the case. Instead the Ring was never completed- stones were added and taken away/fell down over time so it was always a work in progress. The site is a huge henge but incredibly it is as clean as a whistle. Unlike Stenness there is absolutely no signs of burning, inhumations or even animal bones left over from feasting not even pits dug by antiquarians. As the lady said it is as if it's been cleaned up deliberately. Of the remaining stones it's now been established that 13 of them come from individual sites around the islands but only one per location. Interesting only one side of each stone has been cut and this faces inwards- the natural side points to the direction from whence it came. This together with differences in how the ditch around the Ring has been dug has led to suggestions that different areas and stones may have been worked upon by different family groups. 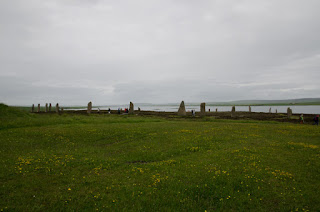 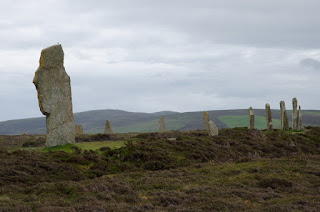 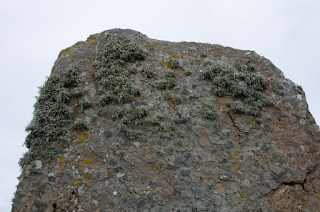 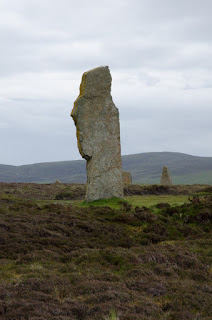 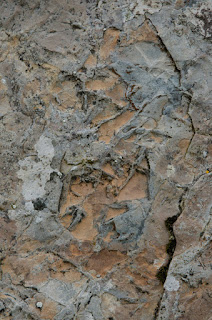 This stone was shattered by lightning in June 1980 and gives an idea of how some of the others may have become broken. 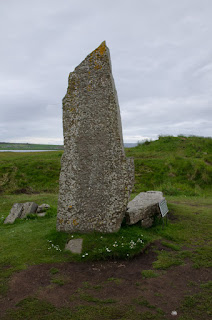 I think one of the most fascinating things I came away with is how the story of the whole area is changing with the new discoveries every year on the summer dig at the Ness of Brodgar. Following a complete survey of the area it seems likely that there is another stone circle and possibly a burial mound beneath the water to one side of the Ring [it would have been dry land when the circle was constructed] and that there is a Neolithic wall running round all of it enclosing it. Following analysis of the cattle bones found at the Durrington dig in Wiltshire last winter it has now been established that they came from Orkney. This for me shows our ancient ancestors in a whole and magical new light.