The gift of friendship.

Up until my last big girl's job I never mixed work with pleasure. I've worked with some really lovely people over the years but it's been my personal choice to keep my private life separate. The last company I worked for was a completely different kettle of fish. It was a training company and I had originally gone along as a student except I never quite left! It was owned and run by a married couple who treated us amazingly well. After a couple of years they recruited another ex student who over time has become an incredibly close friend. A fellow Druid, we celebrate the wheel of the year together, and she always makes me laugh....we belly laugh the whole time. She's one of those people that plays it completely straight. You know where you stand with her, she calls a spade a spade but I completely trust her. 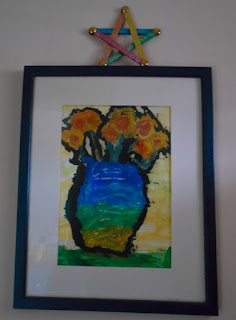 Last time I saw her she handed over this pentacle she'd made me. I'd admired the one she'd made for herself on a previous occasion. There was no ceremony just a brief explanation that she thought I might like one of my own. Such a touching gesture and yes I love it particularly as it seems it was made to go with the picture my son painted when he was a small person. That was the occasion when they'd been looking at Sunflowers by Van Gogh and then they'd painted their own versions. The school was good....they got them all framed and then held an art exhibition and us parents willingly bought our little darlings's pictures. I seem to remember the teacher muttering about how my child had defied the instruction and taken it upon himself to paint in the dark shadowing effect...mmm I went outwardly agreeing but inwardly cheering his freedom of spirit! He was, as now, charming but stubborn and not scared to plough his own furrow despite what his parents and others might say!