Mawkins- the Sussex name for scarecrow. Known by various other names elsewhere in the UK including Tattie Bogle [Scotland], Mommet [Somerset] and Hodmedod [Berks] they are first recorded 3000 years ago in Egypt as the farmers built wooden frames covered in net which they hid underneath to scare the quail off their crops. Figures appear from Grecian times in the form of wooden figures carved to look like the ugly son of Dionysus and Aphrodite, Priapus. Here in Europe the Italians rammed skulls on the top of sticks, the Germans built witches believing that they would draw the evil spirits of Winter to them and encourage the return of Spring, whilst we here filled sacks with straw with a carved turnip set on top for the head.

Nowadays the battle between the farmer protecting his crops and the avian flocks intent on eating his crops continues. Set against this background though a new trend for decorating scarecrows as part of a community led activity has emerged. These ones are merely decorative and in the quintessentially British way, often firmly tongue in cheek- they are not intended to be pressed into action, only to amuse those who view them. Ever being one keen to support local free events we followed one such trail yesterday. Although in a local village, it's within spitting distance of our abode, so we took advantage of the clement conditions and pottered over. Being ever the sophisticated soul I am [not] I was like a big kid- loved it.

This won first prize- Who you gonna call? 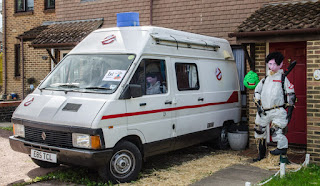 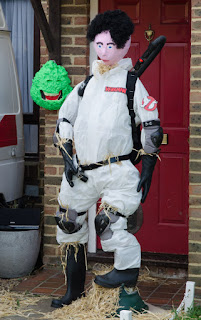 A certain bear who's rather partial to marmalade sandwich 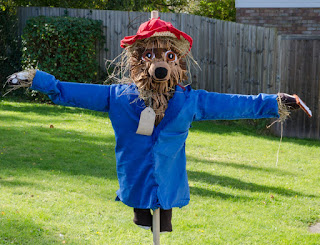 The Wizard of Oz featured in several examples 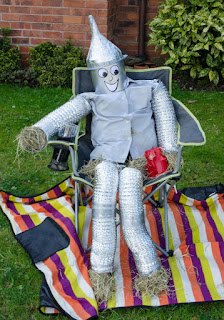 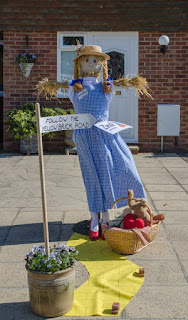 Now a track which will drive you quite potty I am sure- the smurfs. 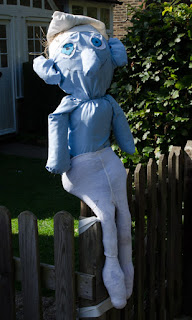 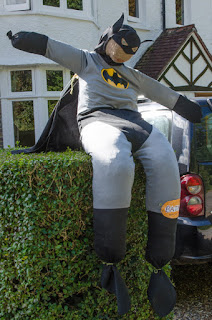 This one is in reference to the Family of Blood episode when the heavenly David Tennant was still the Doctor. 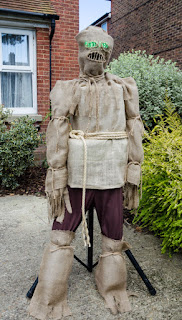 Finally my personal favourite- Audrey Hepburn as you have never quite seen her before and yes, that is a Tiffany's bag she is holding. 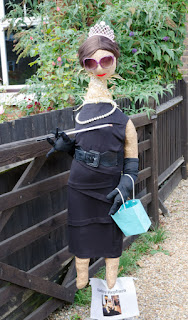