Trust me it's perfectly safe!

Linking back to yesterday's rather over imaginative post perhaps I had best backtrack and give you a more accurate writeup about our visit to the gloriously gorgeous Norwich Cathedral.

Despite my wild claims I think the sign's Dark Entry merely refers to the fact that this particular way of making your way into the cathedral will take you via the somewhat more gloomy cloisters. Perhaps a hazard more on a dark evening that in the brilliant sunshine when we paid a call. 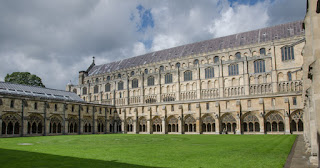 These have the most amazing roof bosses- Some had been restored but I would hazard a guess that many still had their original paintwork. I shall do a separate post on the greenmen I saw for those bored rigid at the prospect! They certainly were fabulously bizarre- I never tire of the glimpse this artwork from yesteryear gives me into the world of those who created them. A few examples- Mr GBT is convinced that the first one depicts the chap stealing the loo roll from the poor Andrex puppy and I think that George Lucas might have drawn his inspiration for Princess Leia from the rather marvellous Medieval lady. We could have just gone on taking photo after photo but time was against us. 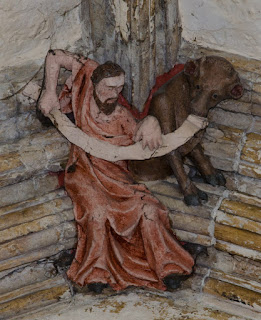 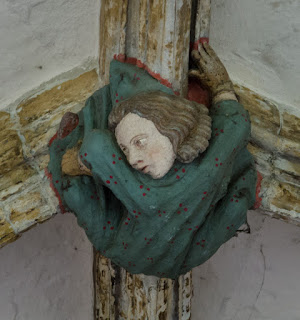 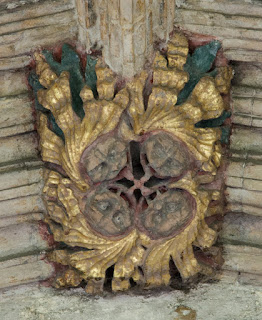 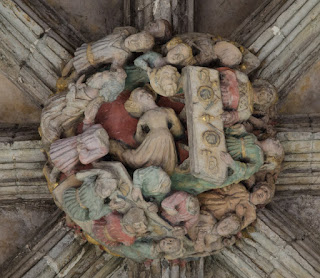 The cathedral is Norman with huge columns and rounded arches. They are self supporting so no need for flying buttresses. It's built on a flint foundation but, as is so often the case, faced with limestone mainly from Caen. This is one of the unusual spiral columns. 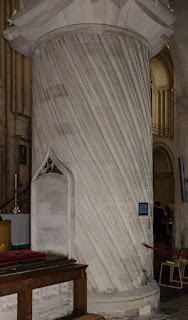 There's nothing like the amount of Norman detailing that I've seen in other examples but this may be down to its somewhat chequered history. As I alluded to in the post yesterday it's suffered more than its fair share of damage both from natural disasters and in times of unrest, the most recent having been the bomb damage in WWII. This blew out many of the windows so now there's a great deal of clear glass- it does show up the delicate tracery to good effect though. 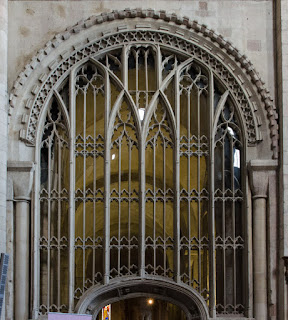 Thankfully the cathedral does have some more modern stain glass windows. Initially I thought that for some odd reason the cathedral walls had been painted the vibrant orange and purple and then I wondered whether it was a special lighting effect. No just the sunshine beaming through the first two in the set of photos below- the other one is the third in the series. 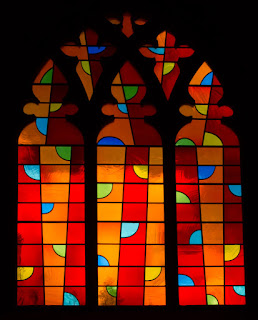 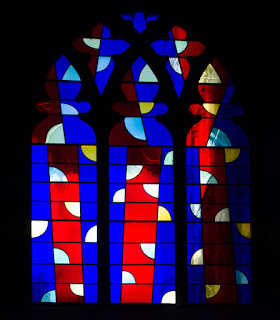 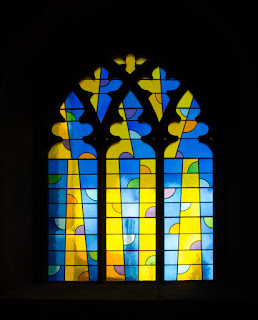 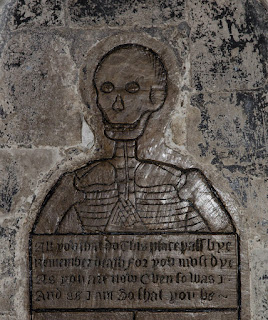 This is Thomas Gooding who, in life, was a free mason and lived in the cathedral close in retirement. In life he lived an unremarkable life but in death he is remembered because he is buried upright in the cathedral foundations. I think the hope was that he would have an advantage over the other old codgers around him because he wouldn't need to heave himself up and thus could be the first in the queue when they opened the Pearly Gates on the Day of Judgement.