Let's talk matters of sun or its conspicuous absence on the Bank Holiday...oh what the heck I went to work as usual and the rain meant I finally got the freezer defrosted so I've made some exciting discoveries and should not need to buy as much grub as I thought. Never let it be said that I'm not a wild child at heart! 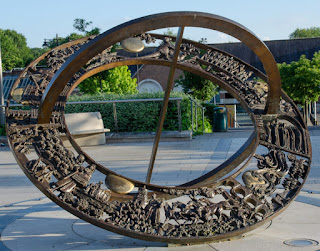 It was designed by Lorne McKean and opened by the Queen in 2003. It's a fair old beast size wise and illustrates the heritage of the local area in a series of beautifully detailed scenes from the first iguanodon discovered through to WWII. Some tales I have already touched upon in previous posts but here I'll share another one or two as they form part of my online diary and record of my locality as well. 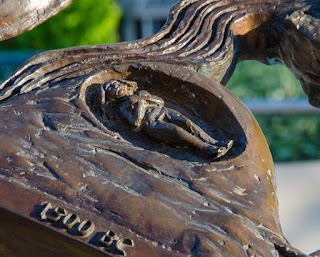 This young lady was discovered in one of the burial mounds on Chanctonbury Ring. Buried in a leather bag with a knife the research shows that she had spent most of her life squatting down. Why we will never know. 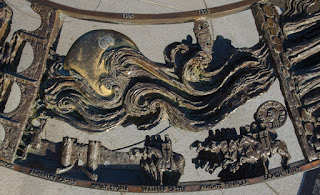 Above is the depiction of a great storm which caused the inland port of Bramber to begin to silt up. Nowadays it's a village and impossible to imagine that ships were ever able to land there. The bottom right hand corner shows the Knights Templar who had links to the area. They had rebuilt the church at Shipley but admidst rumours of corruption the order was closed down in 1308 and they forced to leave the country. 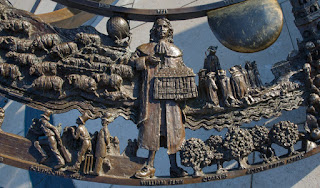 This fellow is William Penn he of Pennsylvania fame no less who was a local yokel. Famously rejecting the Church of England for the Society of Friends [Quakers] he turned his home [no longer standing] into a meeting place for his brethren. In 1682 he sailed to America with 100 "Friends" to form the state of Pennsylvania and escape hostility in his home land. One of the meeting houses he set up locally here still stands and is now known as the Blue Idol. 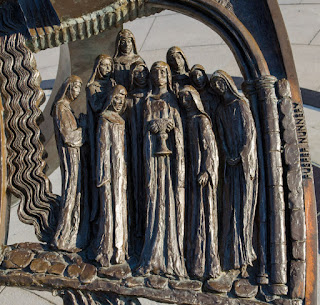 These are the nuns from the local village of Rusper. Not a great deal to tell really save for a former student of mine once lived next door to the site of the nunnery and her parents had rather a jolt when the building of their new conservatory turned up human bones...they turned out to be the mortal remains of these ladies and were quickly re interred in the local churchyard. The more interesting snippet is they owned a beautifully Limoges enamelled chalice which was excavated in the cemetery in 1840 only to disappear again from the records. It reappeared in the 1950s on a sideboard full of sweeties. Such is its importance that it is now housed in the British Museum http://www.britishmuseum.org/research/collection_online/collection_object_details.aspx?objectId=63050&partId=1 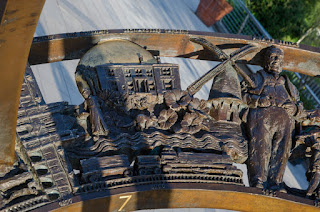 To finish Hilaire Belloc who lived in a windmill not far from here. He wrote widely on an eclectic range of subjects and walked across America to propose to Elodie Hogan who turned him down. Not to be dissuaded he served time in the French army, read History at Oxford and then tried again. Thankfully she accepted this time and both are buried locally. I have used it before but I do so enjoy this particular quote from him so make no apologies for recycling it!

"When I am dead, I hope it may be said: his sins were scarlet, but his books were read."