Such marvellous things books- as often as not when reading it brings me into contact with a whole host of new information or sends me off at a tangent to find out what an unfamiliar word or phrase means. Such was the case in point with this borrowed book that I'd read through quickly yesterday. 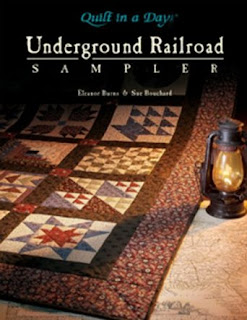 The Underground Railroad was first set up in the 1800s and was a network of safehouses and trusted individuals who helped to free slaves from their incarceration in the South and escape to safety in Canada where they could not be brought back.

It became known as the Underground Railroad in 1831 because of the similarities to the railroad network- the slaves followed routes, the safehouses were known as stations and the leader was called the conductor and the runaways were passengers. The underground is derived from its secretive nature upon which it depended for its success so that the slaves could avoid recapture by the slaveholders or officials who were pursuing them. Slavery at this time was still a legal trade  The advice given to the fugitives was to "Keep your eye on the North Star" ie to keep heading North. Using the system a hundred thousand made good their escape. One of the major players was Harriet Tubman ,who had herself escaped in 1849. She made 19 return trips to the southern plantations and her actions gave 300 their liberty. She threatened to shoot anyone who lost their nerve and wanted to turn back.

Despite being a major episode of historical note there are few recorded accounts of the movement. However, through the oral history of Ozella McDaniel Williams passed down by her family it was claimed that slaves were taught how to achieve a safe passage by following key messages in certain quilt patterns eg Jacob's Ladder. This has as alternating path of dark and light and can be used to show direction. There were supposedly 10 such quilts in all. Although it is not proven one way or the other it makes for a good story nevertheless!