I have my chum C to thank for furnishing me with this snippet- she originally hails from Bristol.

"Paying on the nail"- a common phrase used in everyday parlance meaning to pay promptly in cash and seal a business deal.

The origins of the phrase are disputed, but it existed in Anglo Norman times as "payer sur le ungle", ungle being derived from the Latin"ungula" meaning claw or nail. The phrase is also in use abroad- in America it is known as "cash on the barrel or barrelhead".  As in Liverpool and Limerick, there are four permanent bronze pillars in front of the Bristol Exchange known as nails and certainly transactions were carried out on these. They may well have been modelled on the mobile tables which were taken to medieval trade fairs for the same purpose. The oldest nail in Bristol in probably Elizabethan, one was given by Robert Kitchen [d1594] and the others are dated 1625 and 1631 respectively. Originally they were located in Tolzey Walk but were moved when the Corn Exchange was opened in the 18th century. 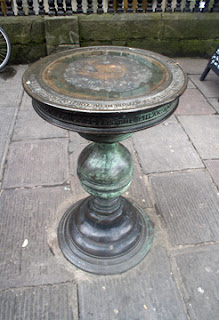